The first in person convention for the members of the Union of British Columbia Municipalities since COVID took delegates into the world of Zoom is set for Whister this fall.

And when delegates gather they will be adopting the convention theme of "Value of One, Power of Many".

The theme explained as one which will explore the ways that local government can and must forge together to successfully align rescuers to deliver community needs.

As municipal and regional government members in the Northwest make their plans for their travels south  they can keep an eye on opportunities for nominations to the UBCM Board as well as the Resolutions portion of Convention week.

That is one of the key parts of the convention where local initiatives get a larger review from the provincial body and could form policy proposals for the UBCM to the provincial government.

So far, the CityCouncil members in Prince Rupert have not identified what themes they hope to take up at UBCM, what resolutions if any they plan to submit for consideration, or which cabinet ministers they hope to snag for some time to discuss issues of note.

As we outlined earlier today, Regional District Board members have outlined who they wish to chat with at the Convention, identifying seven of the NDP Cabinet members for discussions around the convention events.

The event will take place at the Whistler Convention Centre from September 12 to 16. 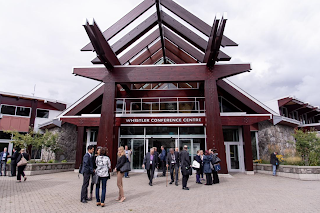 You can learn more about the 2022 convention from the event's home page here.

The 2022 UBCM convention will be the final one for at least two members of the Prince Rupert City Council, with both Mayor Lee Brain and Councillor Blair Mirau announcing in January that they would not be seeking office again come this fall's vote.

The remaining members of Council have not as of yet declared their intentions towards the 2022 Municipal election campaign for the October vote.

More notes on the Prince Rupert Municipal government themes can be explored through our archive page.