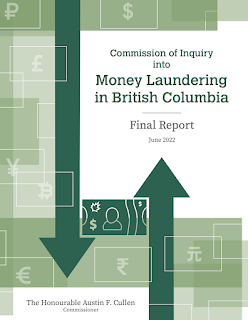 If you have ever wanted a career path where you get to follow the money, there may soon be some employment for you as the BC Government reviews the recommendations  from the report of the Commission of Inquiry into money laundering in British Columbia.

We outlined some of the work of the Commission last week when the report was handed over to the provincial government.

The report which is the work of Commissioner Austin Cullen and his staff was released by Attorney General David Eby on Wednesday.

The Minister highlighting how the findings serve to validate the concerns of many British Columbians.

“The findings of this commission validate the concerns of many British Columbians. They were right to be worried and right to be demanding action on money laundering. The commissioner’s finding, after more than a year of study, that the volume of money laundering in our province is ‘enormous’ is profoundly concerning.
It is also well grounded in testimony from police, experts in the field and direct research. This important conclusion and the commission’s connection of money laundering to violent crime and the illicit and poisoned drug trade also confirms our government’s reasons for taking action, and the need for further efforts from governments, regulators and businesses."
The Report which totals 1,620 reports explores the topic extensively, the Executive Summary providing for the synopsis of what the Commission explore over the course of its 133 hearing days.
Among some of the key areas of concern identified through the report include:
Money laundering is a significant problem requiring strong and decisive action
British Columbia has made progress on money laundering, but much remains to be done
The Province should establish an Independent AML Commissioner, who will provide strategic oversight of the provincial response to money laundering.
The RCMP's lack of attention to money laundering has allowed for the unchecked growth of money laundering since at least 2012.
A dedicated provincial money laundering intelligence and investigation unit is needed to mount a sustained and effect response to money laundering.
Law Enforcement bodies must mark better efforts to follow the money and pursue money laundering an proceeds of crime charges
Asset forfeiture must be pursued more vigorously
Unexplained wealth orders will be a valuable addition in the fight against money laundering
Elected official were aware of suspicious funds entering the provincial revenue stream through the gaming industry, but there is no evidence of corruption
The implementation of Peter German's recommendation has significantly  curtailed the prevalence of illicit cash in BC casinos
The BC Real Estate sector is highly vulnerable to money laundering
Realtors have a poor record of anti-money laundering reporting and compliance
Money laundering is not the cause of housing unaffordability
Lawyers are exposed to significant money laundering risks, but are subject to extensive regulation by the Law Society of British Columbia
A reporting regime for lawyers poses significant constitutional challenges and should not be pursued
Cryptocurrency is an emergency money laundering vulnerability; it should be addressed through provincial regulation
The Full list and some detailed explanation towards those items listed above is available in the first thirty pages of the Executive Summary.
The Report also includes 101 recommendations from Commissioner Cullen.
All of the material can be explored here.
Much of the overview period took place during the times of successive BC Liberal governments, though while noting of some less than thorough oversight and accountability on the issue by the government of the day from each period; the Commissioner did not discover any elements of corruption that may have come out of the issue of money laundering.
Yesterday's information release from Minister David Eby did not outline what kind of a timeline the Province is on when it comes to implementing the list of recommendations from the Report.
The topic made for much of the news and opinion pieces from the ranks of the province's political opinion makers, you can review some of those below:
Cullen commission cites need for key czar position to curb BC money laundering that totals 'billions'
Cullen downplays money laundering as cause of unaffordability, corruption
Cullen says he didn't see how money laundering contributed to BC housing affordability
BC needs new, dedicated unit to successfully solve 'staggering' money laundering problem: report
Federal anti-money laundering agency failed to stop flow of billions in criminal activity from BC, report finds
Money laundering 'enormous' in C, but no evidence of corruption, commissioner finds
BC money laundering report calls for new law enforcement unit, provincial office
Federal 'failures' on money laundering prompt BC inquiry to call for provincial watchdog
RCMP and FINTRAC blamed in landmark report on Money laundering
BC Liberal Government roasted in Money laundering report
More notes on the report release are anticipated in the days to come, you can review how the report is being received through our political Blog D'Arcy McGee and our Victoria Viewpoints feature.
A wider overview of developments from Victoria is available through our Legislature archive page.
Posted by . at 2:38 PM