The Province of British Columbia is currently hosting a public comment period to receive feedback from the public on an application by CN Rail for a Crown Lease on some land along the Skeena subdivision  near Port Edward.
The land application is part of the fish habitat plan that is required as part of the Zanardi Bridge project.
The documentation that is part of the Application is provided below and outlines the scope of the work that CN has planned towards that project. 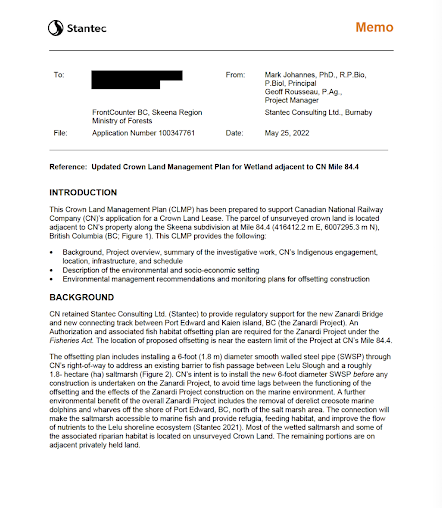 In additional notes, CN outlines how the objective of their proposal is part of the offsetting plan to support local marine resident fish, invertebrates and migrating juvenile fish.
The area has been identified as both a feasible and potentially productive habitat that is accessible for construction within the CN property and the Zanardi project for which it will offset habitat losses.
The details to that work to take place along the railway not far from Lelu Island can be explored further here.
The deadline to submit comments will close on July 20th.

To participate in the comment process click here for a link to the Ministry submissions page.
The link above also takes you to the home page for the engagement from the Ministry which offers up a review of all of the documentation on the file to date.
For more notes on CN Rail see our archive page here.
Posted by . at 11:53 AM