Operations Director Richard Pucci shared his enthusiasm for a pilot project for the Omenica area that will see that west side neighbourhood serve as test case for an ambitious waste treatment solution for the community.

Speaking at Monday nights Council session to support his proposal to seek out further funding of 1.31 million dollars for the program.

As part the presentation Mr. Pucci provided an update for the council members as to how the first element of what could be up to eleven similar sites created around town is moving forward.

"As you are aware, the wetland treatment is looking to do a pilot program for about 100 homes and if successful will drastically reduce the capital costs for us to have sewer treatment for this community.
So, we are requesting that Council endorse an application to the UBCM for the SPF grant" 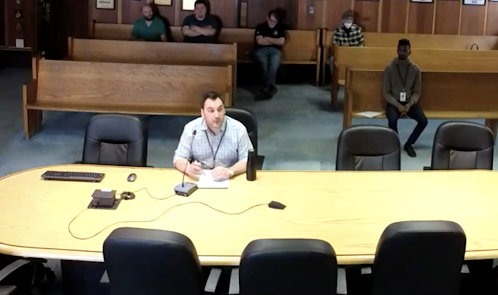 Mayor Brain started off a short Q and A session on the proposal, the Mayor asking about the total cost of the Omenica project.

Mr. Pucci observed that the total cost has increased from the original total previous.

"The total project cost is just over six million dollars, we started out at four, but the two million dollars is really to build a road to get into where the location is"

Councillor Cunningham looked for some additional background on the history of the technology and its past use in other communities.

"It's new technology, it's new for Canada, but it's been used in Europe and elsewhere in the world for decades and decades. There are two compliant systems that we know of right now that are working that are fully permitted. Well, there's two on the East coast and there's a small on in OK falls that is operating and successful with permits and comes out with totally compliant test results"

Councillor Nick Adey took an optimistic view of what could be ahead, asking for how Mr, Pucci would move forward and manage it from the pilot project.

"I'm feeling optimistic today, on the assumption that it works and its successful, so then we have a successful system servicing a couple of streets area in the Omenica Avenue area.

How then, if that's six  million dollars or so. How then is that going to translate when we decide  it's successful so let's do it throughout the entire city.

Towards a reply the Operations Director outlined the planning work done previous and how he views the plan moving  forward and compared the city's plans to that of the more traditional waterfront structure option.

"We completed a feasibility study first before we went for a pilot program. The feasibility study was conducted using FCM grant money as well. It showed that we could do eleven of these wetland treatment areas within our community, in our green spaces. There's a document that shows where all of them are.

The discussion at that time was between seventy and eighty million dollars to do all eleven and obviously when we talked about classic treatment, concrete style clarifiers and all that along the waterfront was about 200 million when you had to separate everything.

A question from Councillor Randhawa towards the initiative provided a snapshot from Mr. Pucci as to what the timeline for further projects may look like.

"The idea is to do this pilot program in our environment and then do one full year of testing to ensure that it meets all of the requirements under the current Wastewater regulations for the Federal government.

And once we've proven that and truced out that technology, then we can then look at getting more grants and moving forward.

The great thing about this is, is that if we implement this over a phased approach throughout  the community over the next ten years, every time we phase one in we have areas that are treated.

Instead of a big 200 million dollar spend that could take ten years or twelve years to get there and then sort of a light switch where it comes on. It becomes an ongoing,  it's you know 10 percent,  then 20 percent then 50 percent of the community is treated.

Councillor Cunningham asked for additional details on what the sites would look like and what residents might notice about them.

"What we're being told and shown is that there is no odour and it basically looks like a tall grass field, there's a certain type of taller grass that goes in there  ... it's one way, there's no contact between what's you know going into the ground versus what's on top of the ground.

There's fabrics and there's different media that's there to make sure that there isn't any contact and no smell. There has to be fencing around the outside of it, short fencing doesn't need to be anything spectacular, but it will just look like like these grassed plots, long grassed plots.

From what we understand and from what's going on on the East Coast thats similar weather patterns to us is that it just stays green all year round and even with the snow it sort of hibernates for a bit and comes right back.

So there isn't any issues with our weather, actually, it actually thrives in weather like ours"

The full presentation can be reviewed through the City's Video Archive starting at the nine minute thirty second mark.

Mr. Pucci's report and a look at some our past items related to the proposal can be reviewed here.