Some fencing now up around the string of Row Houses on McKay Street, would seem to suggest that demolition work is near for the existing structures, with new housing to follow in the west side neighbourhood.

The fencing went up over the last week or so, blocking off an area closest to Kootenay Avenue across from the city's Dog Park and running up the Hill on McKay to the east.

The area in question, seemingly that where a Six Storey Apartment building and rental town homes will go in what would be the first phase of the Harbour View Affordable Housing development. 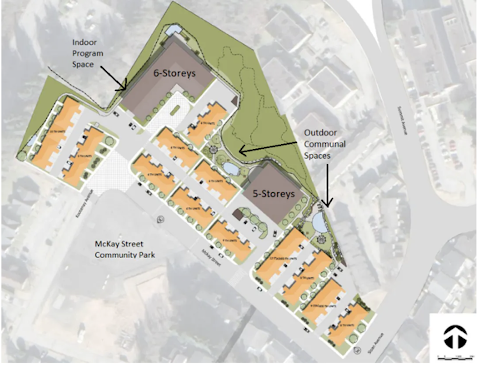 While BC Housing and their partners in Prince Rupert have kept in contact with those to be impacted by the development, relocating residents into other units while the work gets underway; they have yet to provide an official public announcement as to the work ahead, or a timeline towards its development.

The last public notes on the plans came in June of last year, when they outlined their plans to replace the now forty year old units with what could be up to 192 affordable rental townhomes and apartments on the site.

That would add significantly to the volume of housing available in the area of McKay and help towards the current accommodation crunch that is found in the community.

You can review their prospectus from that time here.

More on housing in the Prince Rupert area can be reviewed from our archive page here.