After Further Review ... BC Government cancels plans for Royal BC Museum and launches more extensive consultation process towards its future 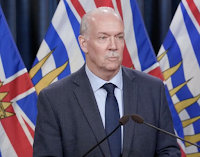 After close to six weeks of controversy, as things turn out, the only excavation work related to the Royal BC Museum in Victoria will be that which is required to dig Premier John Horgan and his NDP government out of a deep political hole.

Today, the Premier started on that Big Dig, by announcing that the Government plans announced back in mid May for the near 800 million dollar rebuild for the Victoria museum were now off, the government instead now charting a course of what they call broad public engagement to consider all options for the future of the museum.

“I always try to act in the best interests of British Columbians. That involves listening. That also means taking responsibility when you make the wrong call. Over the past few weeks, we listened to British Columbians who have made it clear they want the Royal BC Museum to remain open while we rethink our long-term plans to protect its priceless artifacts. That is exactly what we are going to do.” -- Premier John Horgan. 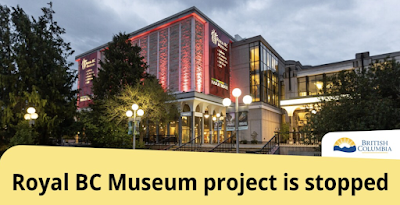 The decision announced over the lunch hour comes following what had bee a gift of sorts to the Opposition parties, both the BC Greens and the BC Liberals who made the most of the month long tempest to frame the move as that of a legacy seeking Premier who was out of touch with ordinary British Columbians.

Both of the opposition parties noted of the rising level of inflation, out of reach housing hopes as well as troubles in both the Health and Education sector as areas where 800 million dollars may be better spent.

As the controversy percolated into the early part of June, the Premier had seemed to step back from the situation; leaving it to Melanie Mark his Minister of Tourism, Arts and Culture to fend for herself under the constant attacks from the opposition about a government with misplaced priorities.

Today Minister Mark made note to the path forward:

“Museum leadership will undertake a broad public engagement to determine our next steps. At the end of the day, this museum belongs to the people of British Columbia, and their voices will determine its future.”

For both Ms. Mark and former Minister Lisa Beare before her, the Premier relived them of the burden of bearing any blame on the way things evolved, speaking to the responsibility for the decision in his comments today.
"As I said I had two ministers working on this, Lisa Bear initially in the first term of our Government and Melanie Mark over the past two years and both of them worked very hard to ensure that we were getting the message out to people about the importance of protecting these items
I want to thank them for their hard work, but I want to assure British Columbians that any failings, any failings in this initiative do not fall to them, they fall to and to me alone" -- Premier John Horgan
The Premier also observed that something as important to British Columbians as the Museum should note become a political football.
"I cannot allow something that should be supported by all British Columbians to become a political football. It should not be a partisan question.
Regardless of how you vote, regardless of where you live in British Columbia you should be proud of our collected heritage going back for time immemorial, to the advent of new settlers coming to British Columbia from every corner of the world.
Their archival materials, their artifacts their stories are housed in our museum. They're not Liberal, they're not Conservative, they're not NDP, they're not Green. They're British Columbias and I'm very proud of that and I want to make sure that all British Columbians can be proud of that too" -- Premier John Horgan 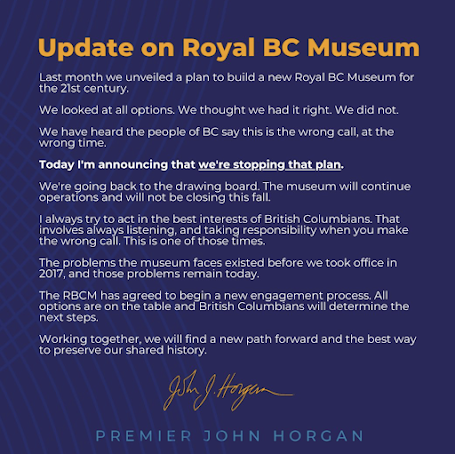 As for the consultation ahead, how it will take place wasn't fully explored at today's information session, the Government providing some of its framework as follows:
Public engagement will seek input on what British Columbians want to see in a modernized museum experience. It will also address structural and safety issues identified with the current buildings. The structure, timeline and scope of the public engagement will be determined by the museum board with a view to connecting with the broadest possible range of British Columbians, including First Nations, business groups, members of the public and other stakeholders.
During the month of controversy, the NDP caucus for the most part kept a sense of Omertà on the project, many of the MLA's pointing to a statement from the NDP caucus chair Jagrup Brar as their only comment on the 800 million plans.
The Government statement on the new vision towards consultation on the fate of the Royal BC Museum can be reviewed here.
Today's information session  with Premier Horgan along with the Question and Answer period with the media can be viewed below:
More notes on themes coming out of the Legislature can be reviewed through our archive page here.
As Mr. Horgan noted in his comments today,  the Government announcement of the day is sure to generate much in the way of comment from the province's media.
"I know we have some elder scribes in the room, I cast my vision over to the one who I know I'm talking about, who will undoubtedly remind his readers in the days ahead, that at no time has sober second thought happened so quickly.
Perhaps its a result of social media, perhaps its a result of any number of other initiatives I would like to think that its the result of a government that listens to what people want and does its best to deliver on that"
You can review some of those findings from both elder statesmen journalists and those of lesser vintage later tonight when we update our Victoria Viewpoints feature on our political blog D'Arcy McGee.
Posted by . at 3:42 PM