NDP Museum plans could be long running gift for Opposition 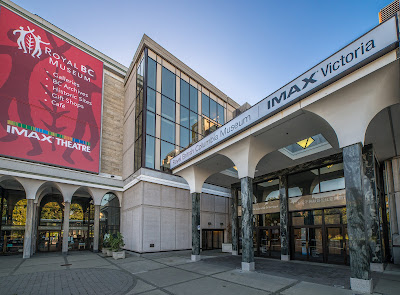 John Horgan's NDP government is feeling some significant heat when it comes their recently announced plans to create a Brand New Royal British Columbia Museum, a project which at an estimated cost of 800 million dollars is proving to be an enticing target for those of the opposition benches.
From those comments above from May 13th has come the Business case(of sorts), which was released yesterday by Melanie Mark, Minister of Tourism, Arts, Culture and Sport.
The document has been received with mixed reviews, particularly when it comes to over 100 pages of redacted information that both BC Liberals as well as some of the Victoria press gallery note really don't offer much in the way of information on costing, which is the main focus it seems for most anyone outside of the Horgan cabinet.
Business case for Royal BC Museum
The business case comes following last week's surprise announcement of the decision to not only build a new showcase for the provincial capital, but that the current museum would be closed for a significant period of the new build, estimated to be seven year period.
That closure looms fast, with the original notes of May 13th noting that the museum will close it doors on September  6th of this year. The estimated date for the doors to the new facility to reopen comes sometime in 2030.
The announcement last week, made for much of the focus for the opposition and somewhat of a gift for new Liberal leader Kevin Falcon's debut in the chamber, and while at times he was a little rusty in his legislature skills, the new leader did manage to score some significant political points on Mr. Horgan and Ms. Mark during the Question Period of last week's Legislature sessions.
And while the need for a new facility or extensive renovation for the existing structure is a long overdue proposal, the eye catching cost, disregard for potential cost over runs and delays to construction and complete shutdown of the facility has made for the main points of contention.
Particularly as the opposition on what has now become a daily basis, recounts ways that the BC Government might better put to use 800 million dollars, an amount that they update notably to 1 billion for effect. 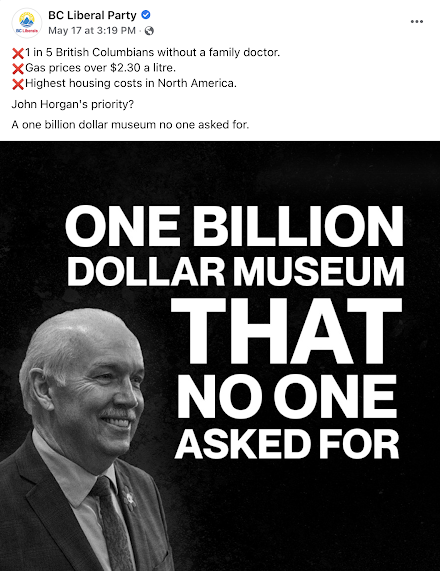 Locally, North Coast Liberals have also taken note of the spending allocated for the museum.
And while they could have chosen any number of areas to target for how that spending could help this region. whether that be in health, transportation or housing; they have put their focus on a long running promise that actually goes back to the party's own time in office that has yet to be delivered.
That of the still to be seen broken ground for the new Prince Rupert Middle School, a project currently languishing somewhere in a bureaucratic limbo it would seem.

As we noted earlier this month, the last update from the School District came at the May 5th School Board Budget meeting. With Secretary-Treasurer Cam McIntyre noting that the project is awaiting approval at the provincial government's Treasury Board level, though there is yet any indication as to what kind of a timeline anyone is working on towards the build.
North Coast MLA Jennifer Rice hasn't made note of either the Museum build or taken the bait on the PRMS situation so far through her social media feeds.
However, with an eight year timeline for the Museum project, that topic however will probably be dogging both the MLA and the NDP for the foreseeable future, complete with what could be a daily drip, drip, drip of the many ways that the Premier and his government could be spending money.
While local parents, students in elementary schools and educators probably are hoping that the PRMS build isn't on the same timeline.
More notes on the Legislature can be explored through our archive page here.
Some of the commentary and observations from the provincial media in Victoria on the theme can be reviewed through our political blog D'Arcy McGee.
Posted by . at 11:49 AM