Prince Rupert Mayor Lee Brain has offered up some thoughts on the current conversation on the issue of marijuana and cannabis growing operations in the city, responding to an article in the weekly paper earlier this month to outline the city's position on the theme. 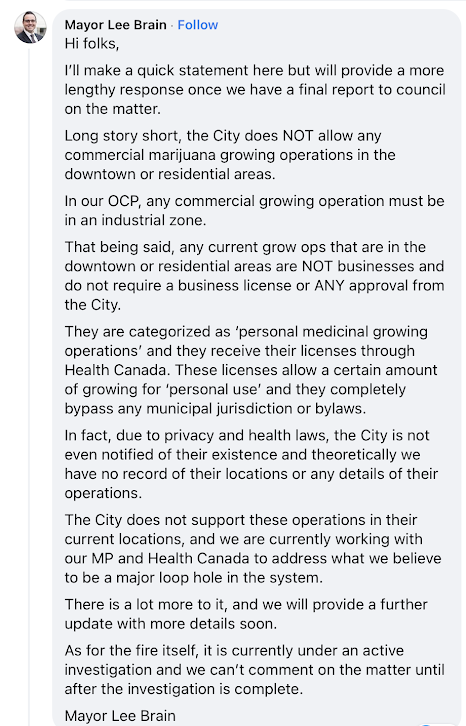 The issue of the grow ops has been somewhat of a talking point in the community since the suspicious Fire that consumed the Belmont Hotel and Rose's Oriental Kitchen and Gifts, an investigation into that incident is now in the hands of the RCMP.
The Mayors comments appear to have been an exclusive to the weekly paper comments section and one that generated replies from some of the residents that may have read it.
What the scope of the 'final report' for council may consist of, was not explained and there was no timeline provided as to when that document may be ready for distribution and if the public will be able to review it as well.
The Mayor's talking points were not repeated on his own City focused Social media feed, nor was it made note of at the most recent City Council session of May 9th, a twenty three minute public meeting that saw no members of Council offer up an indication of any civic discussion topic ahead for the often simmering issue.
At the session, Council did note of a change in command for the local RCMP detachment and their hopes to bring the new Officer in Charge to Council for a discussion on a number of themes in the community.
As we noted back on May 9th, the focus on cannabis and marijuana in commercial buildings has been one that has been often brought to the attention of council, but so far little has been announced as to how City Council may be able to resolve the situation.
Skeena-Bulklely Valley MP Taylor Bachrach made note of the concern from the community last week, though other than noting that he would bring it to the attention of Federal officials, he also offered little short term hope of a solution.
More notes on Civic themes can be reviewed through our archive page here.
Posted by . at 10:55 AM