It's never really the 'off season' in the NCAA ... Illinois State info campaign includes profile of Prince Rupert's Liam McChesney 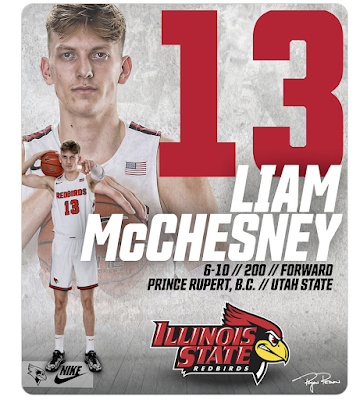 Prince Rupert's Liam McChesney is among the roster members of the Illinois State Redbirds getting a social media shout out this week, as the Illinois program under new head coach Ryan Pedon begins its work towards the upcoming Division One season.
The new coach took on his position at Illinois State following the NCAA regular season and the elimination of the RedBirds from the annual March Madness tournament. He arrived at Illinois following a five year stint on the staff at Ohio State which saw much success at tournament time.
The change at the top of the hierarchy at Illinois State won't be a new thing for the former Rainmaker to adjust to, he faced a similar transition at Utah State prior to his transfer to the American midwest for the 2021-22 season.
This week, the team has been providing short profiles of those Redbirds returning and the new additions to the lineup, the Rupertite's notes highlighted the increased success he found with his new team as the season was winding down earlier this year.

The Redbirds will be gearing up through the late summer and early fall for the start of their 2022-23 season with Pedon at the helm, the schedule for the season ahead has yet to be released by the NCAA.
To follow the teams notes through the summer season explore the Illinois State news wire here.
The roll call for the Redbirds of 2022-23 was also featured through twitter on Tuesday.
Some of our past notes on Prince Rupert area athletes across North American can be reviewed from our archive page.
Posted by . at 10:56 AM