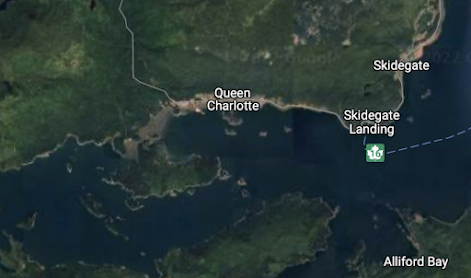 A notice for the night marking the item of note for the council and the community for the evening. 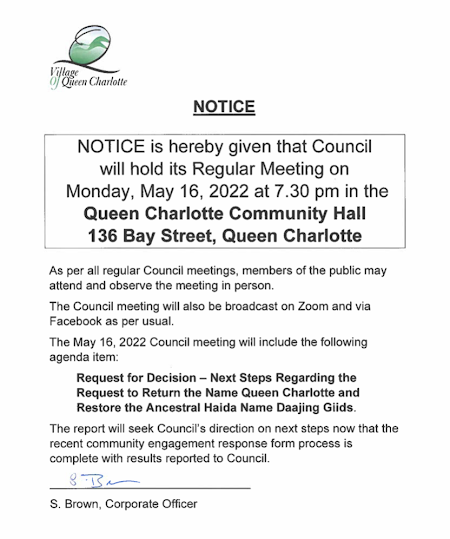 Agenda item: Request for Decision - Next Steps Regarding the Request to Return the Name Queen Charlotte and Restore the Ancestral Haida Name Daajing Giids.

Council members received a report on the topic from staff as part of their evening work.

Among the themes from the report, was a glimpse as to how the question was being received in the community. 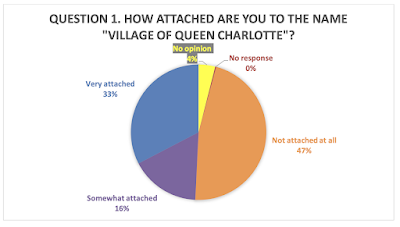 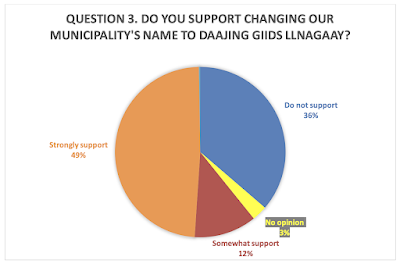 Included in the report were a number of comments from respondents to a community survey, with commentaries that covered a wide range of input towards the decision that was made on Monday.

Community residents spoke to the topic at the Monday session as well to share their thoughts and observations on the process that came before the vote.

In both cases some were speaking to the process to advance the plan and others to the split in the community, a situation which will need to be addressed by the elected officials as they move forward with their name change plan.

Though in most cases the commentary seemed to indicate support for the council initiative.

The discussion by Council did make note of some of the divisiveness that the issue has brought to the community, however a call for a full referendum on the topic as suggested by one councillor was not approved.
Each of the council members spoke to the topic during the course of the session at the community hall, with Mayor Kris Olsen bringing those commentaries to a close with his final thoughts to the name change.
"We live in a big country, you know we're as far west as you can go. Maybe this will start spreading east and more communities will look  at doing what we're doing.
I stand behind the process, I stand behind the ... community and I am honoured to stand here tonight to make this vote"
The council will now move the process of the name change to the province for further action, with Municipal Affairs Minister Nathan Cullen destined to receive a correspondence to the topic.
Skeena Bulkley Valley MP Taylor Bachrach was one of the first in the Northwest to take note of the new name, offering up his congratulations to the community this morning.

Also making note of the pending change is CBC Daybreak North Broadcaster Carolina de Ryk, who will be adding a new name to her lexicon of morning greetings to listeners.

North Coast MLA Jennifer Rice who represents Haida Gwaii in the Legislature has yet to comment on the history of the Monday night decision from the Council members.
More notes from Queen Charlotte as it transitions to Daajing Giids can be explored from the council Facebook page.
Further items of interest from Haida Gwaii can be reviewed from our archive page.
Posted by . at 1:08 PM