One by one, we may be getting to know the members of law enforcement in Prince Rupert a little bit better, that with some interesting profiles of the local detachment provide this week as part of the ongoing salute to National Police week.

Yesterday we noted the introduction to Constable Brody Hemrich, who made for the first of the week's features.

Also up for a profile this week is Corporal Eyrin Wiita, who has joined the City's detachment following a number of years of service in Manitoba, a journey which included service in Pukatawagan and Flin Flon.

The Corporal's work in Prince Rupert is that of a watch commander, providing guidance to the General Duty Constables on the streets of the city.

She's also become active in the community taking up with the local Girl Guide program, an organization she has been part of for over thirty years.

"Having been a member and leader with Girl Guides of Canada for over 35 years, I was excited to start a new chapter in my Guilding experience here in Prince Rupert by having an opportunity to lead my daughter's Sparks unit. The overwhelming support I have received from the community, parents and Sparks themselves has helped make Prince Rupert home. Watching the Spark work together as a team, learn new skills and give back to the community is very rewarding."
You get introduced to the Corporal through this feature from the local detachment. 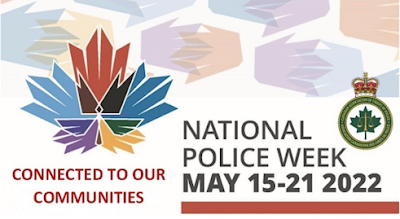 National Police week wraps up on May 21st
More notes on the work of Emergency Responders in the Northwest can be reviewed from our archive page.
Posted by . at 10:48 AM