Some upcoming work proposed for the north end of the Fairview Container Terminal has become a hot topic in the community of late, with concerns that the reconfiguration of the Fairview floats dock area may not reflect what is needed by users at the facility.
As we outlined in March, the plans from DP World would see a move of the southern portion of the Fairview Floats Small Craft Harbour further north of its current location. 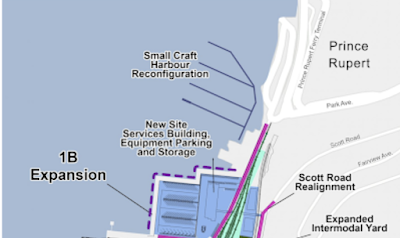 In March, Councillor Barry Cunningham asked that the City Council become advocates for the Fairview Vessel owners, noting of the impact that some of the changes may have on the long established fishing fleet on the North Coast.
The Port Edward Harbour Authority is also interested in hearing from those use the facility at Fairview, posting a call to get in touch with them over some of the issues that have been raised recently when it comes to the plan to reconfigure the Fairview dock infrastructure.

You can share your comments and review the ones that have been contributed to date from the Port Edward Harbour Authority Facebook page.
You can review more on the proposed redevelopment of the area from the DP World website.
Past notes on previous themes related to DP world are available through our archive page.
Posted by . at 10:59 AM