SD52 Budget decision to wait until June, as Board of Education works through Regular Board Agenda for May

The monthly SD52 Board Meeting for may touched briefly on themes of the current Budget process, but no decisions were made on Tuesday evening towards the issues for 2022, that as the Board members worked through an agenda full of presentations and other items, but made little mention of how they planned to address the potential $800,000 deficit revealed earlier in the month.

The session once again held in the Zoom format brought the Board together for one of the last times for the current school year, with a presentation from Pineridge School leading off the evening's work. 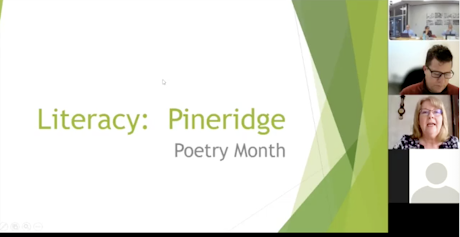 Ms. Debra Fabbi, Principal at Pineridge outlined some of the literary activities at the school. noting of Poetry month which was well received by the students at the school.

The Superintendent's report offered Andrew Samoil opportunity to make  note of a report of some of the field trips planned for the rest of the school year, as well as a look at current enrolment figures for the School District.

Towards that topic, Ms. Sandra Pond provided the update noting that enrolment had gone up by fifteen students in April, with fifteen new students arriving in the schools for a total of 1,835 students as of April 30.

She noted that the new arrivals included four from other countries, three from out of province and eight from out of the District. PRMS gained the largest number at six, CHSS had four and the elementary schools received five new students. 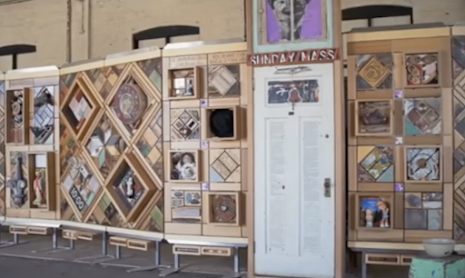 The Board also learned more about the Witness Blanket, the creation of artist Carey Newman which serves as a national monument to recognize the memories and experiences of the Indian Residential School era.

Mr. Samoil noted of a recent ceremony hosted by the School District, with Roberta Edzerza and Lori Burger providing an overview of the travels of the Witness Blanket and what the presentation program in Prince Rupert consisted of.

As part of their presentation, the trustees were provided a glimpse of a documentary on the subject of the Witness Blanket, noting that lesson plans have been made available for local teachers that are tied into an exhibit at the Lester Centre of the Arts.

The presentation at the Centre is available for viewing by the public until May 29th, with an Open House scheduled for May 24th from 4 to 6PM.

Some background on the project can be viewed here. 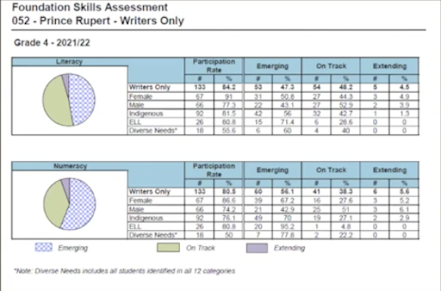 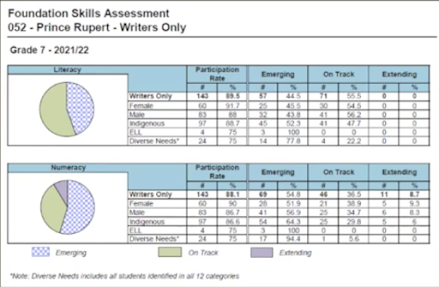 Director of Instruction Sandra Pond provided an update on some data from the Foundation Skills Assessments for 2020-21, from the findings it was noted that there are significant numbers of students who are not yet meeting expectations.

From the findings it was outlined that 84 percent of the students in Grade Four participated in the FSA Literacy program in November, 53% were on track.

For the Grade Seven participants, there was a 90 percent participation rate for the literacy assessment, 56% are considered on track.

In the numeracy Assessment, 88% of Grade Seven's participated with 45 percent considered to be on track.

It was observed that the interruptions to learning during the pandemic may have contributed to these results.

"These Assessments are snapshots of how students are doing, so they're a moment in time. Teachers are able to use that information to inform formatively what they're doing in their classes. If they notice that students have strengths then they can structure some things to work on. And as we know and believe learning is a journey and so students are all on pathway and a unique pathway because they're all unique individuals. -- Director of Instruction Sandra Pond

In response to a question from Trustee James Horne on the Administration's perceptions of the tests, the Superintendent outlined the focus for the Board.

"The way we look at it is, it won't be acceptable until we have 100 percent of students on track or are exceeding. So we do temper the results with, we look at attendance and as we recover from the COVID, which we're still not at baseline yet. The effects of the pandemic are still something that , thatreally plays on our mind when we look at this, not to make excuses, but did that affect the number of writers'' -- Superintendent Andrew Samoil

A short review of some of the upcoming projects in the district called attention to a number of initiatives that are underway or in place at local schools, as well as some of the workshops and other events that educators and support staff participated in.

He also noted of the participation of some student teachers from UBC who are in the District and highlighted the work of the CHSS Writers Club, Kate Toye offered up some observations from the book signing event.

The Board also heard of the plans for the official opening of the Lax Kxeen playground  later in the week and the CHSS Fine Arts Review.

The trustees also received the plan for spending of the annual Facilities plan, that spending looks as follows:

The Board also approved tenders for some capital spending, as part of the spending tenders were awarded for the installation of unit ventilators at Charles Hays Secondary School and École Roosevelt Park Community School by Pac West Ventures Corp. It was noted that the unit ventilators were purchased earlier in the year. This project is funded with Ministry of Education capital grants.

The Board also received a report on the recent BCSTA Annual General Meeting, with a focus on themes of Indigenous Learning that came out of that gathering. Trustee Kristy Maier outlined some of impressions of those that attended the AGM. Among her observations were those of the powerful moments of the learning circle, where trustees heard directly from survivors and their families about the impact of residential schools.

She also highlighted that the motion from SD52 towards First Nation representation on local School Boards did pass, with an amendment attached to it, adding that she looks forward to see what comes of that.

Board Chair Kate Toye also shared some of her thoughts from the BCSTA sessions, and highlighted how the experience impacted on her, other trustees also made note of what they took from the event. Among those observations a consistent theme was that these are stories that everyone needs to hear, and they have an obligation to share what they have learned with others.

While they didn't address the current Budget situation at the May 17th session, Board Chair Kate Toye did outline some of her thoughts on how the Board may approach Budget themes in the future.

Towards the end of the Tuesday session she outlined a concept under consideration that would see SD52 introduce a new Committee for formation, that of the Operations and Finance Committee that would explore budget themes from the beginning of a school year.

Ms. Toye noted as to how some other School Boards that have such an instrument and how it may be used in the Prince Rupert district, with the Board to discuss the concept at their next regular meeting.

"It does look like looking up a Budget from the beginning of a school year. So this committee would work mainly on the Budget. They would look at staffing, they would look at TTOC's they would look at what's affecting the budget. And they would be working towards, working with the budget and then understandingof the budget. So that by the time decisions are needing to be made, it wouldn't be something  to look at in February it would be more of an in-depth look that has happened over time throughout the year" -- SD52 Board Chair Kate Toye

The topic would return for some discussion at the very end of the session, that during the 10 minute Question and Answer period, with PRDTU President Gabriel Bureau making note of some elements of the Budget committee plan.

He asked if that would replace the current consultation process that is in place at the moment.

Ms. Toye noted that she views the program as one that would run separate, but have a process that would. bring in partners.

Mr. Bureau also noted his concerns over the need for the trustees to hear more of the challenges that are being faced by the schools and how there is a need for some forum for that to be shared.

The PRDTU president also raised the concerns of school staff members over the current Budget process and the lack of information shared to date related to plans for staffing for the schools and how notices of layoffs would need to be issued by the start of June.

"My understanding is, that parts of the spring staffing will need to proceed, there are many District's that don't approve their budget until June. And you know,  these will be very early in June that the Board will consider the budget and if there's something that needs to change as a result of that"

And while the topic of school bullying made for much in the way of Social media commentary in the weeks leading up to the Board meeting, there was no participation towards the issue as part of the ten minute public comment opportunity.

The Board also moved their final Regular Board session for next month to June 20th, a shift from the original date of June 21st which falls on National Indigenous People's Day.

The Full Board meeting can be reviewed from the SD52 Board video archive below:

Following the Tuesday evening session, The School District announced that the Budget considerations would be addressed in a Special Board meeting set for June 2, that session once again to be held by Zoom.

You can learn how to participate from the graphic below:

More notes on Education in the Northwest can be explored from our archive page here.