He's one of the hottest things in Canadian music and gaining notice in America as a rising star south of the border, so it's no surprise that Johnny Reid is so popular in Prince Rupert that the Lester Centre has added a second show for his travels to the North Coast in September.

The tickets for Show number one set for September 12 went so fast, that the volume of disappointed fans caught the attention of the Lester Centre and the country star's management, which have now added a second show September 13th, with tickets for that event also moving at a very quick pace as well. 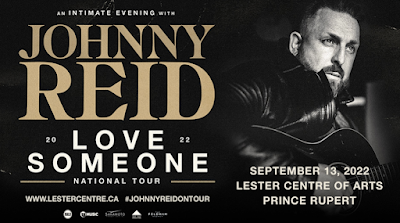 Born in Scotland, his soul searching tunes and ability to weave story into song have long found an audience across Canada, with his past performances filling concert venues from coast to coast, his sound gaining rave reviews adding to his fan base with each stop along the way.

Reid is currently on a journey across the nation this summer as part of his "Love Someone" national tour which will take him to more than 100 communities.

The strong ticket sales both across the nation and here in Prince Rupert, give you some idea as to his popularity, and his time here in September will make for one of the most recognizable names to come to the Lester Centre stage in years.

With eleven albums released to date and multiple awards in both Country and Adult Contemporary music,  there's a large volume of material to be presented to Prince Rupert audiences this September.

Follow the Lester Centre Facebook page for updates on the Tour and other musical acts to come this summer and fall.

More items of note on the Arts and Entertainment scene in Prince Rupert can be reviewed here.