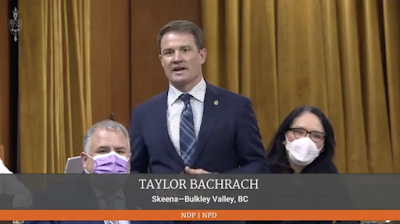 "The situation at Canada's airports is a mess, massive lineups, missed flights, stress and anxiety for so many travellers, all this because the government loosened pandemic travel restrictions but didn't do the work necessary necessary to prepare our airports ... How is that this Ministrer of transport has been so woefully unprepared for travel" -- Skeena-Bulkley Valley MP  Taylor Bachrach on travel issues at the major Canadian airports
Those that have travelled by air through some of the nation's largest airports in recent weeks probably agree with the Member of Parliament for Skeena-Bulkley.
Many of Canada's air travellers have come home with stories of endless lineups and lengthy delays in working their way through the Security Checkpoints at those airports, that as a result of some ongoing staffing challenges being faced by the service providers.

The International Association of Machinists and Aerospace Workers, the Union which represents more than 15,000 aviation employees in Canada, has put the situation on the employer, noting that they were unprepared for the return to travel and have asked the membership to do more with less while working in a very challenging situation.

The topic made for an item of note for Skeena Bulkley Valley MP Taylor Bachrach today, with the MP taking the issue for many Canadians to the House of Commons Question Period, directing his questions to the Minster of Transportation.
The Government's talking points on the situation facing CATSA which is the organization that provides security were rather light in response, other than to ask for patience of the travelling public.
Something that may be a little bit short in supply as the summer months approach and long delayed travel plans suddenly face new problems to intrude on summer getaways.
Also of concern for many is the continued problems for those who are looking to renews passports, with the Federal offices overwhelmed by the demand for passports and seemingly so short staffed that delays and reduced access to the offices has become part of that discussion as well.
On Tuesday, Service Canada outlined the steps it is taking to address that issue.
More items of note from the Federal scene and the House of Commons can be reviewed here.
Posted by . at 3:26 PM