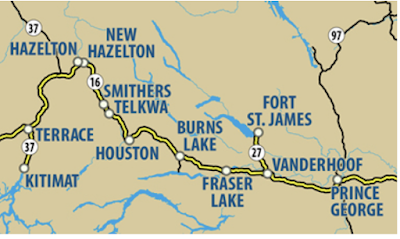 Users of a popular and vital highway connection that runs from Terrace to Burns Lake and on to Prince George are being asked to provide some feedback to BC Transit, that in order to improve the service and plan for the future.

The survey which was launched on Monday, asks those who use the four routes to outline what works well for the service and where the transit users would like to see improvements or enhancements.

The four routes include:

The four distinct routes were launched in 2017, part of a municipal led approach to the end of Greyhound Service and to add to the daily opportunity for travellers to get around the Northwest, complimenting the BC North Bus service and other private ventures.

In addition to the ten minute survey, participants are also asked to submit any ideas that they may have towards transit use between the communities, making for an ongoing consultation panel which others can join in on to comment or share their own ideas towards.

Both options are available here.

The reason that the survey stops at Terrace, is that both Prince Rupert and Port Edward chose not to participate in the BC Transit program back in 2017, the City of Prince Rupert noting of local options at the time that the Northwest wide service was being developed.

Despite occasional calls from other municipalities across the northwest, the North Coast remains off the map if you will when it comes to the service that connects municipalities.

While not part of the service, North Coast residents can still log on to share their thoughts if they wish.

The survey project also provides links to the 5 Point Highway 16 Transportation Action Plan, BC Bus North Service, as well as to offer access to each of the BC Transit options available in the participating Municipalities.

More notes on the Highway 16 corridor can be explored here.