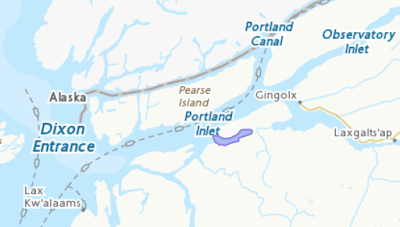 A court challenge brought forward by the Lax Kw'alaams Band Council and Metlakatla First Nation over Nisga'a Nation intentions for the Nasoga Gulf has resulted in an eighteen month injunction, though the undercurrent to the decision from Justice  seems to be to send the three parties back to the discussion stage when it comes to the dispute for the land in question.
The case, which was heard from March 8-10 in a Vancouver court room,  was known as Reece v. Canada and in the forty four page judgment issued May 25th by Justice W.A, Baker, the concerns of the Allied Tribes are explained extensively.
The process of review dating back through history and taking us to 2016 when the Nisga'a and Crown announced the commercial terms for the Nisga'a Nation to purchase the lands and lease the foreshore and submerged Crown lands.
The main thrust of the Nisga'a commentary at the time, that of noting they were in effect: "purchasing our own land at fair market value, lands that are already included in our Treaty areas"
The opposition of 2019 by the Lax Kw'alaams Band and Metlakatla First Nation, was described at the time by the Nisga'a as being politically motivated, that with elections on the horizon for both communities.
During that period of time and in the months and years now that followed, the Allied Tribes would raise awareness of their concerns over the agreement and their historical claims to the area in question, with a range of information approaches. Included in the approach an information blockade along Highway 16 used towards reinforcing their position.
As the chronology of the dispute has evolved there have been a number of discussions held with all the parties involved, however no resolution was found, which brought the topic to the courts in March.
Since that agreement, the Nisga'a have outlined plans to develop an LNG facility in the area in question, the KSI project, which is still in its very early proposal stage.
The Conclusion to the judgement puts the current dispute into focus and notes how the Allied Tribes concluded the application with submission that their primary objective towards the injunction is to give the parties time to engage in a dispute resolution process before any decision is made on the Disposition and Consent.
With that, an injunction for a period of eighteen months was granted, the Allied Tribes have leave to apply for an extension of the injunction, if good faith negotiations between the Province, Canada, the Nisga'a;a and the Allied Tribes are not completed in that time.
All of which appears to set the stage for some extensive discussion ahead for all the parties to resolve the impasse, with the fate of the KSI Lisims LNG project just one of the elements caught up in the current pause for development related to the Nasoga Gulf and Lands.
The full 44 page judgment can be reviewed here.
So far, other than the Lax Kw'alaams Band making note of the Court ruling on its website, none of the participants have offered up further comment on the current state of the dispute.
We traced some of the original elements of the dispute from 2019 with this archive page.
Further notes on the proposed KSI Lisims LNG terminal can be explored here.
Items of interest from the three principles in the dispute over the last three years can be reviewed through our archive pages below:
Nisga'a Nation
Lax Kw'alaams
Metlakatla
Posted by . at 9:06 AM