Travellers to points inland this weekend will want to check the Rivers Forecast Centre updates through the next few days to stay alert to any changing situations, with the provincial agency issuing a High Streamflow Advisory for much of the river networks of the Northwest for an area stretching from Terrace in the West to near Burns Lake in the East.
The most recent bulletin from 1 PM on Wednesday was focused mainly on the Bulkley River area 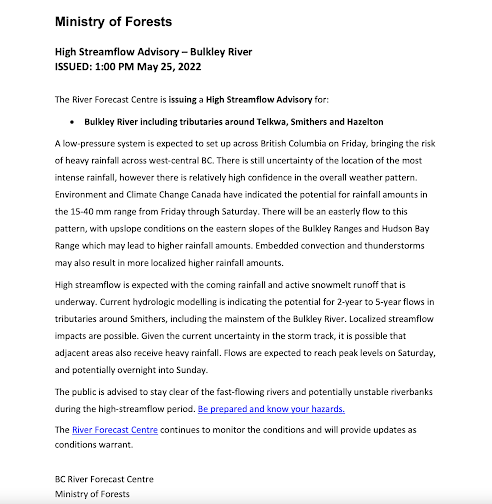 Along with the Stream Flow advisories, of note this year is a significant snow pack to be considered, with the Rivers Forecast Centre last updating that situation on the 15th of May, noting that this year brings the largest snowpack since 2012.
Warming temperatures could make for a rapid melt, which combined with any significant rainfall could make for a quick change for the alert system for Northwest residents.
A high Stream Flow Advisory is that which notes: River levels are rising or expected to rise rapidly, but that no major flooding is expected. Minor flooding in low-lying areas is possible.
To keep up to date on the Rivers watch, follow the Rivers Forecast Centre here.
More notes on weather related themes can be explored here.
Posted by . at 10:18 AM