A welcome sight for a few of the city's councillors can be seen this week in Prince Rupert, with Yellowed Line Painting in town, taking to the city's streets today to throw down some white road paint while the sun is shining.
The work has started in the Roosevelt Hill, Summit and Sloan areas of the city with crews putting down crosswalk makings and stop lines for the most part.
A notice from the City of Prince Rupert from earlier today indicating that they would be moving on to Section Two later in the day with a focus on the Second Avenue Bridge area. 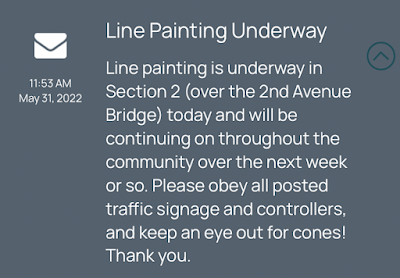 The need for line marking has made for frequent comment from both Councillors Wade Niesh and Barry Cunningham over the last year and a bit, with both noting that the program had seemingly fallen off its original pace in recent years.
You can follow the City's Mobile App for more updates on the road marking plans, or follow the City's Facebook page for notes on the work ahead.
More notes on the city's Operations plans can be reviewed from our archive page.
Posted by . at 2:36 PM