Spectrum Dance Studio, a long serving fixture in the community to close doors at end of June

Dancers of the past and parents of those of today are reacting with some shock today, as word begins to be shared of the upcoming closure of Spectrum Dance Studio, the Fraser Avenue home for dance in the community for over three decades.

In a letter to those who have attended the Dance Studio through the years, as well as those who have been long time supporters of Dance in Prince Rupert, Ella Ferland the Artistic Director for Spectrum City Dance, outlined the factors that have led to what had to be one of the hardest decisions that she has had to make.

In the correspondence, Ms. Ferland noted of the declining enrolment for the programs offered at Spectrum and how the financials no longer offer enough cushion for the payment of bills, salaries and such that are required to keep the Dance Studio in Operation. 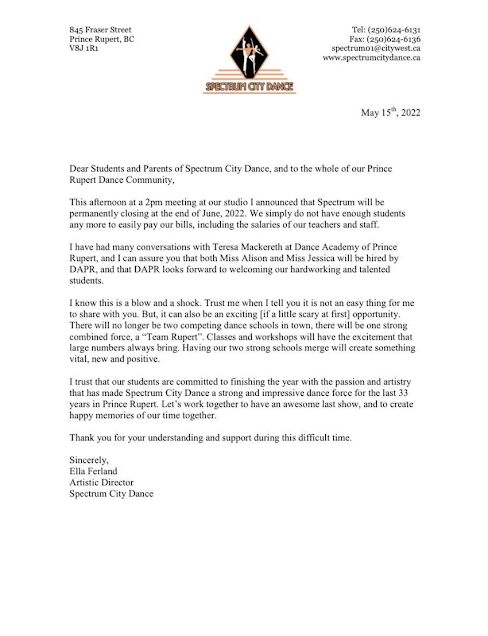 Ms. Ferland noted of conversations with Teresa Mackereth at the Dance Academy of Prince Rupert, which will take in some of the staff members and will be welcoming the Spectrum students to their program.
She also observes of what the combined talents of both Dance Studios could bring to the community and for future competitions.
In their most recent appearance at the BC Annual Dance competition, the Spectrum Students put the wrap on their final competition of the season, bring a large volume of energy and scoring some strong placements.
As par of the high profile event, The Spectrum Dancers counted 16 First, 13 Second, 14 Third and 1 fourth place finish, along with featuring 7 large groups in the Gala.
The Spectrum City Dance Facebook post that has served as the host for the announcement of the Closure is quickly becoming a page to relay appreciation for the hard work over the years by the Spectrum group, as well as some sadness that the situation has come to the result announced over the weekend.
More notes on the Arts in Prince Rupert can be explored through our archive page here.