Today marks the second visit for 2022 of the Princess Lines Cruise vessel Ruby Princess, the ship pulling up to the Northland Terminal towards 7AM this morning, preparing to send thousands ashore to explore the Prince Rupert area during the course of the eight hour stay.

The ship is one that makes for an impressive image coming alongside and looming large as it does over the Cow Bay/Atlin Terminal part of the city, the transit however, one that is of note for small boaters as well.

That as noted by the Metlakatla First Nation recently, which delivered a notice for small craft owners tied to the Metlakatla Dock  for Cruise Ship days when it comes to the departure of the vessel. 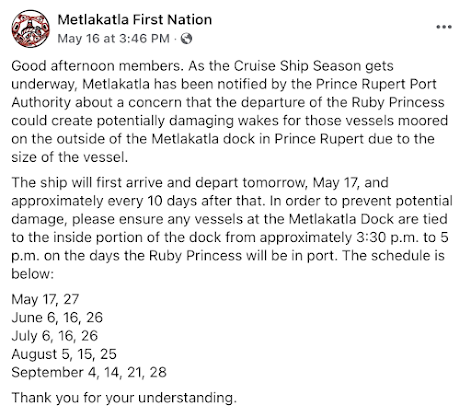 Boaters are not the only ones to receive an advisory with the arrival of the Ruby Princess, with thousands of passengers ashore and tour buses coming and going from the Northland Terminal region, the Prince Rupert Port Authority has also noted of the need for caution for those who may be transiting through the Cow Bay portion of the city on Cruise Day. 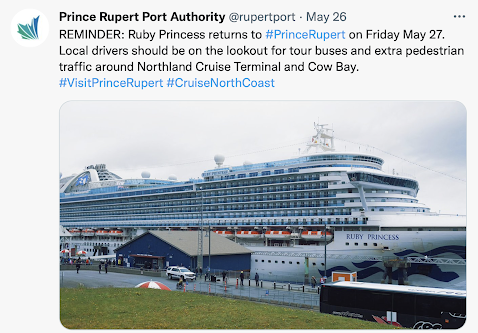 Today's departure time from the Northland Terminal is listed as 3PM

More notes on the 2022 Cruise season can be explored from our archive page.