It was a familiar story at the Jim Ciccone Civic Centre on Saturday night, as the Prince Rupert Rampage could not hold a hard earned lead from the first into the final two periods of play.

A defensive lapse which allowed the Kitimat Ice Demons to record a valuable road win and grab two more points for the CIHL standings.

The 500 fans in the stands of the Civic Centre had much to celebrate in the early going of Saturday's game, as the Rampage took off to an impressive start with two goals in the first period.

Kendal Stace-Smith picked up the opening marker at 6:12 of the first, assisted by Greg Sheppard, a quick attack in the Kitimat end of the rink that provided the home side fans with something to cheer about.

However, that was a 2-0 lead that held for but twenty seconds, as Kitimat shaking off the Rampage offence and a bit of their own lethargy, launched their comeback for the night. Picking up their first goal of the game and reducing the margin to one heading into the second period.

The middle frame made for a rather rough affair, with multiple fights and misconduct penalties handed out, the majority of them in the first four minutes.

For the most part, the scoring opportunities of the second, were overshadowed by the rough stuff, at least until the last minute of the period. 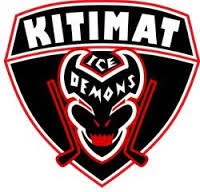 With but ten seconds to go in the second, Kitimat pulled even with the Rampage, setting the scene for a wild third period of play. Leaving the home side fans hoping that the local side could close the night out with a win.

Those hopes were dashed early however, as the Ice Demons took the 3-2 lead for good within the first minute of play in period number three. Their early period marker holding true through the final 19 minutes of the game, much of which featured more of the rough stuff with additional penalties and misconducts delivered by the officiating crew.

Away from the penalties, when the two teams took to the offensive play, they were fairly balanced in their shots on goal. With the  Rampage directing 36 shots at Kitimat goaltender Thomas Mildenberger, while Colby Hagman did his best to hold off the attack for the Rampage turning aside 30 of the 33 shots that he faced.

Beyond the recurring troubles of the Rampage  in holding off the charge of an opposing team, the discussion post game most likely was that of the penalty totals from Saturday night, the bulk of which were assessed to the Ice Demons.

A collection of major crimes and misdemeanours, that kept the official scorer busy for most of the second and third periods.

By the end of the game the Ice Demons had picked up 51 minutes on 21 infractions.  While the penalty totals for the Rampage totalled 32 minutes on 14 infractions.

The full summary for Saturday night's match up can be found here.

The loss leaves the Rampage with a record of 1 and 5 and sets up a challenging two weeks ahead for the team.  Prince Rupert takes to the road for the next fourteen days, with games in Williams Lake and Quesnel next week, followed by a trip to Kitimat on the16th.

The Rampage return to the Jim Ciccone Civic Centre on October 23rd, when the Smithers  Steelheads come to town.

You can review the scoreboard, summaries and standings from around the CIHL from our results page, for more background on the Rampage and the CIHL check for the latest from our archive page.

Email ThisBlogThis!Share to TwitterShare to FacebookShare to Pinterest
Labels: November 2013, Rampage lose to Kitimat in physical game at Civic Centre