The much documented financial concerns of the last few years for the City of Prince Rupert have provided for one fascinating result. Owing to the lack of cash in city coffers, the City's standing in the annual CFIB municipal spending survey is making the place look positively parsimonious among municipalities when it comes to civic spending.

The latest review of municipal spending by the small business group has Prince Rupert listed as one of the lowest of civic spenders in the last 365 days, with a new ranking of 148 holding the City close to the bottom of of the provincial listings.

The annual review is designed to highlight the spending habits of the province's municipal governments and while others are highlighted for their free spending ways, the financial crunch that the city has faced of late, would seem to be keeping Prince Rupert well off the radar of the CFIB.

With per capita spending by Prince Rupert of $1,576 on Operating spending in 2011, the City of Prince Rupert is well down the list of cities that the CFIB highlights when it comes to spending.

Though even with the brakes on spending, there has been incremental movement over the last number of years. By comparison, when the CFIB introduced it's first review in June of 2008, the spending per capita was listed as $1,477.

Overall the CFIB review outlines that from 2000-2011, Prince Rupert has seen a 23 per cent decline in Real Operating Spending per Capita Growth.

Though their findings do make note of a 4 per cent increase in the category of Change in Municipal Spending per Capita for 2010-11. 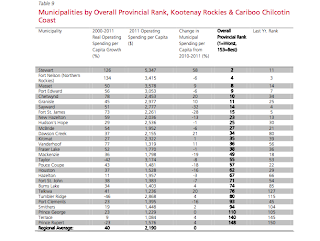 Still for the world of bean counting, Prince Rupert at 148 of 153, along with Terrace at 140 of 153, are both far below the rankings of the profligate across the province.

The collection of what the CFIB calls free spending municipalities, does however feature a number of Northwest communities, providing for levels of municipal spending that the business group considers unsustainable.

Stewart which according to the CFIB calculations spends $5,347 per capita, is considered by the CFIB as then one of the worst in the province when it comes to municipal spending (2nd place overall).

Though they are not alone in the Northwest when it comes to the CFIB's list of concern.

The CFIB also highlighted Port Edward (9th place overall on their list) for spending in too free a fashion, the 2011 Operating spending for the Village was recorded at $3,053 per capita.

Masset also was tapped by the CFIB, the spending of $3,578 per capita last year placed that community at 8th place overall when it comes to municipal spending.

As well the CFIB is keeping an eye on trends in Ktimat, that community was ranked as the 35th worst performer in the province, with spending of $2,322 per capita in 2011.

Those levels are well above the provincial average of $945, that is the number that the CFIB has calculated as the median level of municipal spending from the totals of all BC municipalities.

A bench mark that the advocates for small business no doubt would wish all BC communities to achieve.

Though even at that, the $945 median is of concern to the CFIB, considering that it represents a 32 per cent increase in spending from the year 2000.

You can examine the overview of their report here, the full review of the CFIB Municipal Spending Watch report can be accessed from their website.