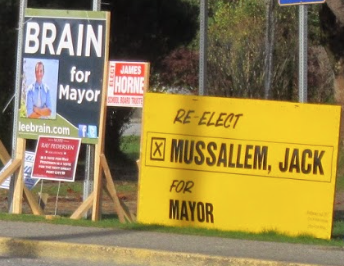 The theme of the need for experience during challenging times got a fairly thorough review at Tuesday's Prince Rupert Mayoralty Forum, as Mayor Jack Mussallem made the relative youth of candidate Lee Brain one of his main talking points.

At times, it seemed as though Mr. Brain's age was almost an obsession for the Mayor, who at frequent intervals during the course of the one and half hour debate referred to the candidate as "young Lee Brain".

The Mayors singular focus on Mr. Brain at one point earned Mr. Mussallem a rebuke from Forum moderator Tom Harvey, who chastised the Mayor for interrupting Mr. Brain during one of his answer opportunities, asking the Mayor to respect the candidates at the forum.

Things on the civility front would get worse for the Mayor later on, when using one of his rebuttal questions on the night, the Mayor again returned to the lack of experience that Mr. Brain brings to the Municipal government level. Suggesting that when things are coming at you very quickly, no one on Council will have time to mentor Mr. Brain.

That was a comment that did not appear to sit well with a fairly good portion of the audience, with boos and catcalls delivered to the Mayor for his approach and the framing of his message.

The interesting thing about the backlash to the Mayor's Forum commentary (and perhaps to his ongoing advertising campaign in the weekly paper) is that Mr. Mussallem does raise some valid questions, about a number of the plans that Mr. Brain is offering to the voters.

Yet any value in those observations, would seem to be getting lost through the Mayor's rhetoric and with the tone that it is being delivered, which comes across as rather nasty.

Along with the frequent references to Mr. Brain's age, Mr. Mussallem did put forward a number of concerns that many in the community might share when it comes to Mr. Brain's extensive plans, which make up the bulk of his Re-Think Prince Rupert proposals.

The Mayor was correct in reviewing the challenges of the office, his experience both as Mayor and in administration over the years, gives him a unique perspective on that theme.

A less caustic approach perhaps, would have better delivered the message that Mr. Brain will find that the actual job offers up a number of limitations. Especially when it comes to his plans for facilitation sessions, policy reviews and the other new approaches that he has suggested will be the new way of doing business.

Likewise lost in the Mayor's message owing to his tone, was the observation as to how a city that is facing any number of financial challenges, probably doesn't have the staffing levels to deliver on many of Mr. Brain's platform ideas.

Mr. Brain does need to be challenged on some of those proposals, something that he seems to have been given a bit of a pass on over the last few weeks.

However, by focusing purely on experience and age, the Mayor missed a valuable opportunity to try and get Mr. Brain to expand on his plans, beyond the string of vision statements and slogans that seem to be the main thrust of his platform so far.

Instead, the approach taken by the Mayor, came across as belligerent and at times even mean spirited.

For the most part, it only seemed to galvanize those that were in the audience to support Mr. Brain,  who appears to have a rather committed core of local voters who remain enthusiastic to his message. Even if the candidate is a little light on the actual details of how all of his plans would actually be delivered.

The Mayor's rather bombastic approach to his challenger, suggests that he seems to consider Mr. Brain as his main competitor for the Mayoralty, but the way he's handling that competition, may in the end deliver votes to either Tony Briglio, or Sheila Gordon-Payne.

Getting booed at an election forum is probably a good warning, that perhaps your approach needs to be adjusted a little bit.

With ten days remaining until election day, clear disapproval such as that expressed by a fairly vocal segment of the audience last night should be heeded.

It could be an indication that if anyone needs to do any "re-thinking", it may be the incumbent Mayor, who may have to quickly revise his battle plan on the way to November 15th.

For more items on the 2014 Municipal Election campaign see our archive page here.