No North Coast Budget consultation hearings scheduled by BC Government 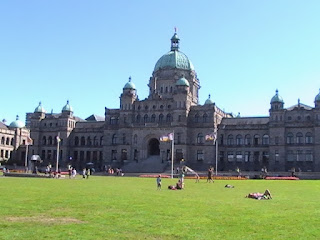 It's budget consultation season in British Columbia and part of that process involves a number of public hearings across the province to hear the comments of residents as the new NDP government works on its financial blue print for February.

The Public Hearing process got underway in late September and has continued through this first week of October and while the public has been asked to submit their thoughts in over fifteen communities, Prince Rupert did not make the list for hosting duties for any of this years sessions of community engagement.

Considering some of the growing issues of concern for residents of the region, the lack of opportunity to provide a personal presentation to the Committee may be something North Coast MLA Jennifer Rice might wish to explain to constituents through her many communication options.

As of today, other than a mention in her fall newsletter of the recent Financial update from the Finance minister Carole James, Ms. Rice has yet to offer up notice of the consultation process, or outline how local residents can contribute towards it.

And while the budget consult may have a low profile, the MLA has however been active on Social media in celebrating some of the "promises kept' by the new NDP government and raising awareness for a pair of other community engagements.

Making note of the government's Grizzly Bear Trophy Hunting ban Consultation program, as well as the consultation process when it comes to legal Cannabis issues.

As for the ongoing Budget Consultation hearing process, members of the Committee,  will be accepting submissions in four locations today, with Fort St. John, Dawson Creek, Smithers and Terrace all part of today's schedule, though the Terrace opportunity is that of a video/teleconference opportunity.

The full list of communities playing host to the budget related hearings can be found below: 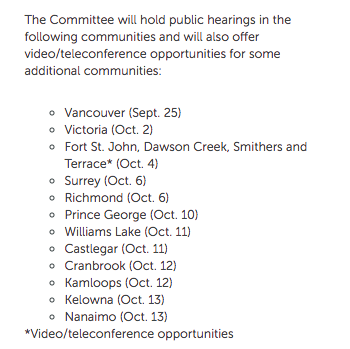 The hearings are hosted by the Select Standing Committee on Finance and Government Services, the final day for the consultation comes up on October 16th, with the committee scheduled to release a report on the consultation by November 15th.

While the North Coast was skipped over as part of this years public hearing process, residents of the region and Haida Gwaii can still make their views known, whether it be through a written statement, audio or video submission, or as a participant in a survey that the Committee is hosting through the BC legislature website.

The Committee report is part of the process that the Finance Minister and BC Government will make use of as they prepare to put together the major Budget document, that will be delivered to the Legislature by Ms. James in February of 2018.

For more notes related to that initiative as well as more background on the Committee see the link here.

You can explore more notes on the work of the North Coast MLA in Victoria from our archive page here.

A larger overview of the provincial political scene is also available from our political portal D'Arcy McGee.