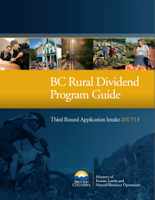 The British Columbia government outlined another stream of grant funding for communities across the province this week, with 528,000 dollars in project development grants delivered to help communities develop strong, stable economies and create long term employment.

Under the program known as the Rural Dividend, communities receive funding up to 10,000 dollars that are directed towards community projects.

The Society is the umbrella group for the North Pacific Cannery Historical Site in Port Edward.

Prince Rupert and the North Coast Regional District did not make the list for grant funding for this round of the financial distribution.

However, other Northwest communities that did receive funding from the program include:

The grant success for the communities of the interior Northwest gave NDP MLA Doug Donaldson an opportunity to share the good news with residents that live fairly close to his base of Smithers/Hazeltons and the riding of Stikine which he is the representative for.

It is Mr. Donaldson's Cabinet responsibility through his work as the Minister of Forests, Lands Natural Resource Operations and Rural Department which oversees the Rural Dividend program in British Columbia.

In a statement released as part of the roll out of the fall financial distributions, Mr. Donaldson noted how the funding allows individual communities to take action in their own economic development.

“I know this new funding will go a long way to ensure that folks in rural communities can share in economic gains, take control of their own economies, and plan and develop projects that will sustain their communities and families into the future.”

You can learn more about the Rural Dividend program here.

More notes related to provincial issues can be found on our Legislature archive page, while a wider overview of the British Columbia political scene is available on our political portal D'Arcy McGee.