Local BC CDC count for this week, makes for the calm before what could be the storm

The Wednesday data release from the BC CDC, culling data from the week of December 26 to January 1st,  serves as sort of a canary in a coal mine moment; with the numbers to be released in weeks to come surely to be of much higher counts as the current surge of Omicron makes its way into Northern British Columbia.

For the week of this report, Smithers once again dominates the findings, tripling their count of just a week ago with 159 cases of COVID reported for the period from Dec 26 to January 1, while Kitimat continued its climb as well,  this week recording 61 cases recorded from the week of December 19-25
After a number of weeks of declining cases, Terrace has seen a significant jump in the period,  marking 54 cases of COVID in the most recent report

Prince Rupert also saw a sharp increased from 8 cases prior to the holiday break, to 23 in just the last week.

Haida Gwaii at 22 cases and Snow Country-Stikine-Telegraph Creek at 28 provide a glimpse at just how fast the new surge of COVID is climbing in the Northwest.

The data review did not breakdown the totals between the newest variant of Omicron and any other variants of the COVID-19 coronavirus.

The full review across the region for the week of December 26 to January 1  from the BC CDC looks as follows: 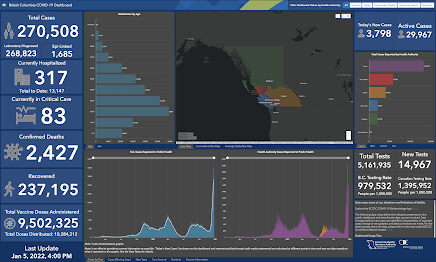 The full report from the Province for Wednesday can be reviewed here.
The larger BC CDC Data release is available here.
Past information statements on COVID and other notes on the Northwest response can be reviewed from our archive page.