Overdose response numbers on the rise in Prince Rupert, and other Northwest communities

When it comes to responding with medical assistance, more and more often Paramedics in the Northwest are making their way to an Overdose call.
With the latest data released by the BC Emergency Health Services providing a glimpse into the growing concern over drug overdoses across the province.
Provincially the data shows that through 2021 BCEHS personnel responded to 35,525 calls, making for 97 ambulance runs per day. The data indicating that calls for assistance across BC have tripled in just the last six years.
For the Northwest the six year review of overdose responses provides a testimony to the growing concerns  from Northern Health over the pace of drug overdoses in the Health Region.
For Prince Rupert EHS personnel it has been a stead climb upwards in the number of responses.
In 2016, Ambulances arrived for 44 overdose calls, by 2018 that had risen to 53, climbing further to 78 calls by 2020.
Last year 2021, brought a slight decline in calls for assistance, with 71 Overdose calls recorded for the Prince Rupert station.
The situation is significantly more challenging in the Terrace region, which saw 38 calls received in 2016, that number skyrocketing to 259 calls in 2021, the highest level yet of the six year review.
Neighbouring Thornhill had 23 calls for assistance, down two from 2020.
Smithers had 42 calls to attend Overdoses, Kitimat had 33 Overdose calls in 2021, Houston 21 and Burns Lake 18
You can review the six year range for all BC communities from this chart.
While COVID has dominate the Health review for much of the last three years now, the ongoing concerns over the rising number of Overdoses is making for another of the major challenges for health care across British Columbia.
Just last week, Northern Health issued a warning over a substance known as down, with an advisory noting as to how the substance currently circulating around the Northwest may be further contaminated with benzodiazepine (known as benzos)  a situation which results in heavy and prolonged sedation.
The concerns over that substance and other poisoned drug supplies in the province is how emergency responders now have to deliver more naloxone than is normally the case to reverse the situation.
In some cases, paramedics have noted how it can take up to four or five doses of Narcan to reverse overdoses now. 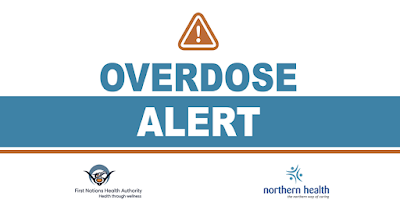 The background on the current alert from Northern Health and the First Nations Health Authority can be reviewed here.
More notes on Health care across the Northwest can be reviewed from our archive page.
Posted by . at 8:59 AM