The Prince Rupert Port Authority and District of Port Edward have noted that today is the start of demolition work on the abandoned vessel Scotch Cap, one of two derelict vessels that are currently in place near the Port Edward Boat Launch.

The unauthorized and abandoned vessel on PRPA property has been an item of concern for years, but interest in the two vessels increased recently as they threatened the Boat Launch itself during the course of a September wind event.

The Prince Rupert Port Authority detailed their approach to the Scotch Cap issue when the PRPA put the barge demolition project out for bids in the fall.

The Port outlined the plans for demolition through a social media message on Friday, noting how contractors will take the vessel apart in pieces, as well as to  remove any hazardous materials.

As a result of the work, access to the Boat Ramp will be temporarily Closed and those who use the facility may have to find alternative plans during the deconstruction process.

The Port hopes to have the work completed by February10th. 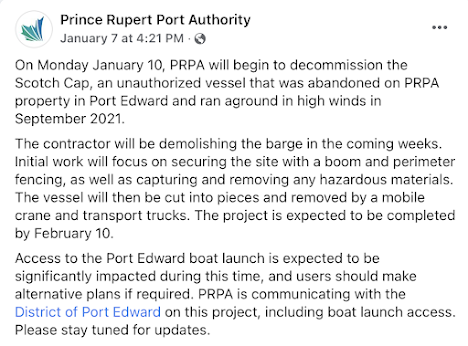 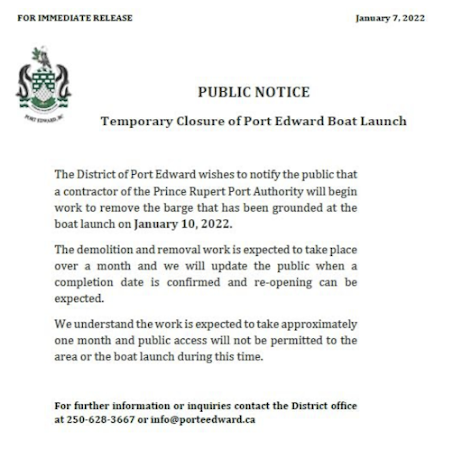 The Scotch Cap is the first of two derelict eyesores that the District of Port Edward would like to be rid of.

Still to be determined is the fate of the MV Fairwind, with the PRPA and District of Port Edward drawing attention to the vessel for the Federal Government in hopes of a plan to remove it as well in the future.

The District will be looking for further assistance from Skeena-Bulkley Valley MP Taylor Bachrach who used his office in November towards the efforts to remove the derelict vessels.

As for the current demolition work, you can find updates through the District Facebook page and that of the Prince Rupert Port Authority.

For more notes of interest from Port Edward see our archive page here.