When it comes to items of note on civic matters in Prince Rupert, there were two themes coursing through social media over the last two weeks or so.

On Prince Rupert Mayor Lee Brain's Facebook feed, it was a celebratory vibe, as the Mayor shared many of the moments of 2021 that he and Council wanted to showcase; a list of projects some new, some recycled, up for review and applause for those who follow his page.

In another corner of the Social media universe, over at the City of Prince Rupert Facebook page, updates on the weather of the last two weeks and the work of city work crews towards addressing it were finding much in the way of interest.

Though the commentary somewhat less effusive at times, on how the city's snow plan had been playing out through December. 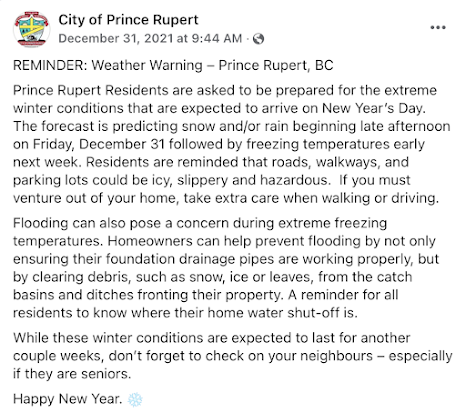 Comments for above can be reviewed here.

Other local social media pages in the community were sharing visuals of front end loaders pushing standing water along a Cow Bay Boulevard over an embankment to try to clear the roadway.

Those videos and others making for a focus point for the community, along with accounts of other areas of note.

Through much of our recent weather, almost everyone it seems had a comment, or observation to share on how the snow battles had played out since the start of December.

As the New Year's weekend arrived, the City seemed to turn the tide to a fashion on some of the concerns, with comments praising their work mixing a little more frequently with the concerns of residents around town as to what still needed to be done.

Comments for above can be reviewed here.

With the arrival of a new week of deep freeze temperatures, we would seem to be in a holding pattern as to the next big melt and the potentially wild scenes of Cow Bay playing out in other areas of the city.

Though the respite from street flooding may be short, with the temperatures set to return to more familiar ranges by January 10th.

Making for a short window to find all the storm drains in the city to ensure that they are free and clear for Mother Natures second act of warmer days.

That timeline happens to coincide with the First City Council session for 2022, and while Council did not seem to have much interest in discussing themes of snow removal in December, with a full month of community feedback to review, it might be an idea for the Council members to make the snow removal themes of the last thirty days one of the topics for discussion when they meet on the 10th.

The opportunity for an update for the public on how the City approached snow removal  is there for Council if it wishes to share some information.

The good and the bad, both from the efforts of its own employees and the use of contractors, as well as to how it all has impacted on the budget for snow removal and what lessons may have been learned from this one month of most unusual weather.

Judging by the interest of the public at large in the topic, a review of how they approached the snow removal themes in December would certainly make for something of interest it would seem, that as we pepare to move through the first few weeks of 2022 and whatever comes next.

More notes on themes from City Council can be explored from our archive page here.