Cowpuccino's is quickly becoming the political cafe of choice for BC Liberal leadership candidates, with would be Liberal leader Mike Bernier making the Cow Bay location a stop on his tour of the Northwest this week.

Mr. Bernier will be at the popular Cow Bay gathering spot this afternoon from 1 until 2 PM, hosting a meet and greet to introduce himself to North Coast Liberals and the larger community.

His Prince Rupert stop is just one of a number of similar get together's across the Northwest this week, as the Liberal candidate looks to raise his profile with would be leadership voters  in what is becoming a crowded field. 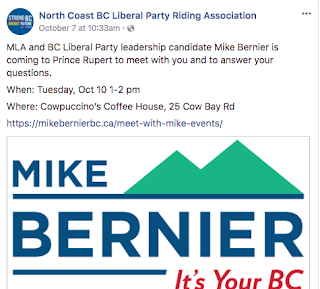 You can learn more about his campaign and some background on what he hopes to bring to the Liberal party here.


The trip to the North Coast will most likely not be the last that area Liberals see of the candidates for Christy Clark's old job, in late September Terrace's Lucy Sager made the pilgrimage to Cowpuccino's to gauge the interest and seek the support of North Coast Liberals.

You can keep up to date on the travel itineraries of the BC Liberal leadership contestants through the North Coast BC Liberal Facebook page.

Email ThisBlogThis!Share to TwitterShare to FacebookShare to Pinterest
Labels: BC Liberal candidate Mike Bernier in NW BC