What might be confused for a giant Meccano play set (some of those born after the Baby Boom generation and more in tune with video games may want to ask their parents, aunts or uncles about that)  is currently in various stages of construction at the Mariner's Park Playground, as city work crews and contractors continue to put the finishing touches on the renovation of the downtown play site.

The installation of a covered area for the playground area finds half the site covered by the framework of a overhead support system, while the second section sits to the side awaiting its own installation.

The purpose of the roof, which will be a temporary feature, is to allow for the proper installation of the rubberized playground surface.

The project began just after Labour Day, taking on a Pirate theme as things have moved along, with the city last stating that it should be reopened to the public sometime this month. 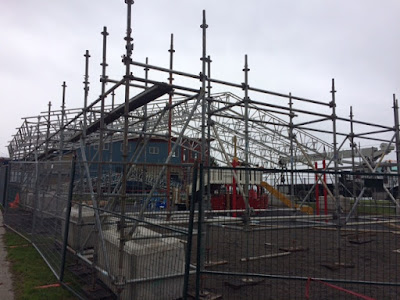 The funding for the new playground came from a variety of sources including the city's Lions Club, along which has been spearheading the project, with the Port of Prince Rupert, Shell Canada (Prince Rupert LNG) and Macro Properties also lending financial assistance for the work.

More notes related to Community events can be found on our archive page.
Posted by . at 9:05 AM