BC's Affordable housing concept set for a launch in Smithers


Last weeks UBCM convention provided for an update on how the new NDP government of John Horgan plans to address the issue of affordable housing, with the Premier providing some background to some immediate initiatives as part of his convention closing speech of last Friday.

"I'm excited to say today that we are announcing a plan to build 2,000 modular homes with 24/7 funding over the next three years. Starting with 600 homes here in the City of Vancouver, 150 homes in Surrey and more in Smithers and any other community in this room who believes that a modular solution to the homelessness crisis in your community will fit with your package of solutions, we invite you to approach the government to get part of that program" -- Premier John Horgan speaking at the closing session of last week's UBCM convention

The full overview of the modular housing program can be found here.

One community set to take the Premier's plan out for a test drive is Smithers.  With Mayor Taylor Bachrach quickly sharing the success of his community's quest to gain affordable housing with local residents last week. 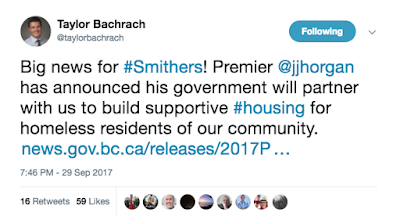 Mr. Bachrach has indicated that the most likely spot for the modular housing concept will be property located on the corner of Railway Avenue and Queen Street.

The development of the site will be through an agreement with BC Housing, with the province picking up the total cost of the project which should be ready for occupancy sometime next year.

Earlier this week, he expanded on the Town's plans for BulkleyLakesNow

The theme of affordable housing has been a constant part of the discussion for Prince Rupert City Council, though of late the topic hasn't been quite as prominent for the council members as it was in the past.

However, despite all the enthusiasm generated in Vancouver for the province's announcement of last week, so far the city has not indicated if they plan to explore the modular housing concept as revealed by the Premier, to see if it fits into the local ambitions to deliver affordable housing.

It's not known if the need for affordable housing in Prince Rupert was one of a number of areas that the now returned Prince Rupert council members might have explored while they were enjoying all that the convention offered in Vancouver.

Updates on their travels for the most part have been limited to the Mayor's social media Facebook page, which has focused more on his conversations with the Premier related to the Resource Benefits Association and themes of the Mayor's work with the climate leadership council.

For his part, Councillor Mirau noted in a media interview this week, that the city had also discussed issues surrounding the legalization of marijuana while in Vancouver.

Hopefully, when Council members return to the public debate of the council chamber next week, they'll be able to offer up a more detailed review on their trip to the convention and provide an update on some of the key items of interest from their discussions.

Considering the focus most have put on housing over the last three years, it would be welcome to hear of their thoughts on whether the Provincial plan outlined last week will work in Prince Rupert.

Further background on housing issues in the northwest can be found here.
Posted by . at 9:36 AM