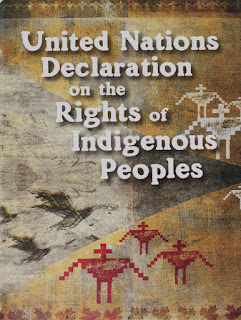 An opportunity to learn more about the United Nations Declaration on the Rights of Indigenous Peoples is coming to Prince Rupert later this week, part of a tour of the region by a group known as UNDRIP Northwest.

Paul Joffe, a lawyer for the Grand Council of the Crees and Jennifer Preston, the Indigenous coordinator for the Canadian Friends Service Committee, will have visited four communities across the region by the time they wrap up their short tour on Thursday here on the North Coast.

The public event which is free for those wishing to attend will outline the elements of the UN declaration and discuss the merits of the document.

As well, the public information session will review how the declaration will strengthens Indigenous rights in Canada and what it means for residents of the communities of the Northwest.

The Northwest Tour includes stops in New Hazelton tonight and Terrace on Wednesday.

You can learn more about the tour here.

Canada adopted the resolution back in May of 2016, the implementation of the declaration has been described as an important tool in protecting and strengthening Indigenous peoples and their communities.

A short video provided by UNDRIP Northwest provides some background on the Declaration and how it is hoped it will provide for a better explanation of Indigenous Right and Title to the land and how governments engage with Indigenous communities.


The concept of the Declaration was first introduced to the United Nations back in 2006, working its way through the UN's resolutions list through the course of the decade that followed.

The Federal government's path towards endorsement of it started in 2010 with a Statement of Support, it was not until the fall of 2015 that the Liberal government moved towards implementing the document, announcing in May of 2016 that without qualification,  it was fully in support of the declaration.

In April of last year, Carolyn Bennett, the then Minister of Indigenous and Northern Affairs delivered an address to the United Nations as part of the 10th anniversary of the declaration.

A wider review of the United Nations Declaration on the rights of Indigenous Peoples can be found from the Declaration document available here.

More items of note about Community events in the Northwest can be found on our archive page.

To return to the most recent blog posting of the day, click here.
Posted by . at 9:25 AM

Email ThisBlogThis!Share to TwitterShare to FacebookShare to Pinterest
Labels: UNDRIP sessions in NW