It's been a busy week and a flurry of action for the City of Prince Rupert Operations crews, with a full attack on the snowbanks in many areas of  the city, with the downtown core a particular focus, with snowbanks and berms getting much attention along Third Avenue and a number of residential streets.

The week of snow removal getting a boost after a somewhat delayed response prior to the holiday period, the new energy for the work buoyed after the city brought in a number of local contractors to lend an assist to the city crews, the visual of the week front loaders filling up a parade of dump trucks to haul off snow from city streets to range of dumping sites around town. 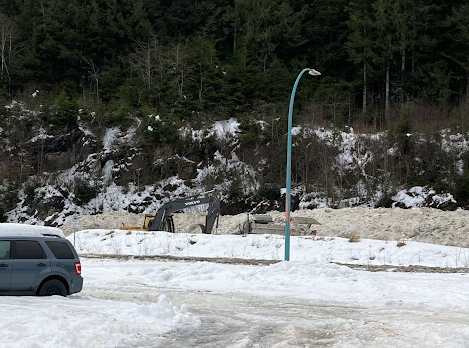 The push to remove as much of the frozen blocks of snow and compacted ice now becoming a race against a clock. That as Mother Nature and Environment Canada provide indications of a change in the climate experience is ahead.

With our Arctic Warnings now at an end (as of this morning) and warmer temperatures (7 degrees for Monday!!!) and rain set to settle in over the weekend.

The forecast for the end of the weekend and start of next week noting of up to 70mm of rain to come by Wednesday, making the clearing of storm drains a somewhat urgent matter between today and the first rains of Saturday night.

That with the return to duties for the city's Communications Manager Veronika Stewart, whose public information missives began to flow earlier this week.

The City's Social Media stream featuring a number of notes of interest for residents and updates on snow removal through the week. 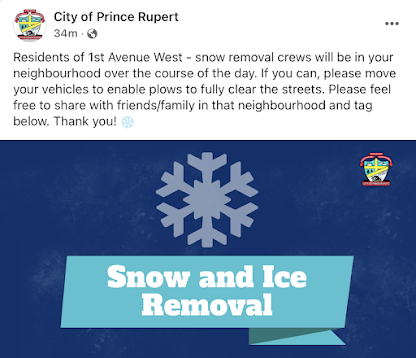 That rush of notifications coming after a significant period where there were few updates on the city's snow removal work through December.

An absence which found much of the conversation on snow removal taking place on social media following the occasional updates that did appear  of the pre holiday period.

The City of Prince Rupert is not alone however, when it comes to getting a bit of feedback from the public.

The City of Terrace which has seen significant snow fall in recents weeks, something their citizens are somewhat more used to than those of us on the North Coast, also had heard from their residents, though the were fairly proactive in their information relay, providing for an extensive overview of their snow removal plans and operations, along with a Q and A phone line for residents to use. 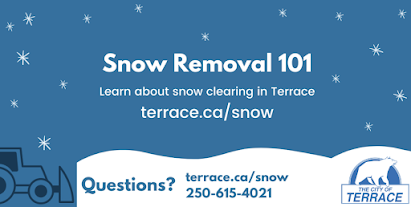 All in all, the Terrace approach a helpful bit of message making that the city of Prince Rupert may want to borrow a page from.

The month long deep freeze and snow removal challenges and successes in Prince Rupert may even find their way into Monday night's first City Council session of 2022.

The upcoming Monday night session the first opportunity for City Council members to discuss local issues since early December,  with a month long period of memories, talking points and maybe eve a few phone calls and emails for the councillors to call upon, should they wish to share a few thoughts on the city's work over the last thirty days.

Notes on the city's Operations work can be reviewed here.

More notes on civic themes and council discussion topics can be explored from our archive page here.