The Liberal Government has turned back the clock on some of the changes made to Fishery policies during the Stephen Harper Conservative years, with Fisheries Minister Dominic LeBlanc introducing the new policies on Tuesday, following up on the introduction of Bill C-68 in the House of Commons.

“To preserve, protect and help restore our environment we need a Fisheries Act that Canadians can trust. Today, I am pleased we are introducing amendments to the Fisheries Act that will restore the protections for fish and fish habitat that were lost under the previous government. We are responding to calls from Canadians who told us clearly that the health of our fish and ecosystems is important to them, and that they want us to protect and rebuild fish habitat. By restoring lost protections and incorporating modern safeguards, we are creating a Fisheries Act for the future to preserve our precious resources for generations to come.” -- Federal Fisheries and Oceans Minister Dominic LeBlanc, rolling out the new proposals for changes to the Fisheries Act on Tuesday

A good portion of the new regulations are directed towards issues in Atlantic Canada and Quebec's inshore fishery, but there are some key points that will be received well by fishermen and shore-workers in British Columbia, with some long sought items for the North Coast mentioned as part of the proposed Act.

Called A Fisheries Act for the Future the Federal government will be looking to a number of themes that have been raised locally in recent years.

Better ability to protect biodiversity in the long term

The new act is also described as a starting point for reconciliation with Indigenous peoples.

The new legislation will reverse cuts to the Fisheries Act made by the Conservatives during their time in office, restoring lost protections and adding to science and environmental protection and enforcement.

The quest for adjacency, something which UFAWU-Unifor on the North Coast has been calling for over the last few years also seems to be getting a little closer at hand, though that element will require more discussion and some clarification by the Federal Government.

One goal of the new act is to keep the benefits of fishing with harvesters and their communities, though the language related to that particular aspect of the new changes to support independent fishers is somewhat muddy, with a reference to inshore fisheries of Atlantic Canada, but no specific mention of the North Pacific concerns.

UFAWU-Unifor has yet to provide any thoughts on the new legislation and what it may mean for the local industry, which has been hard hit in recent years, with industry changes resulting in reduced work for shore-workers in the region.

A short video from Fisheries and Oceans Canada provides a glimpse at some of the main elements that the government has introduced as part of the proposed legislation.

The scope of the input from Canadians towards the proposed revision to the Fisheries Act included over 200 letters delivered to the Fisheries Minister, as well as an additional 200 submissions provided to the government from Indigenous groups.

Fisheries officials met with over 170 Indigenous groups and received 5.438 e workbooks that helped steer the conversation on Fisheries Act reform. 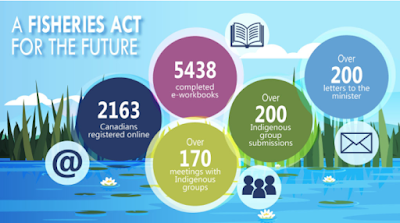 The introduction of the New Fisheries Act reforms came as part of a cross Canada tour by the Minister you can view his presentation from this link to his speech in Vancouver yesterday.

During his presentation the Minister outlined how the new measures would protect fish habitat on the Pacific Coast and touched on a range of items in a follow up Question and Answer period.

The Conversation on the proposed changes continues on with a twitter forum #FisheriesAct hosting a number of comments and observations about the legislation outlined by the Fisheries Minister.

The government's new Fishery blue print will now work its way through Parliament's Legislative calendar. Included in that process is a caucus review, a Committee phase for comments and observations and the engagement of MP's on the floor of the House.

So far, Skeena-Bulkley Valley MP Nathan Cullen has yet to offer any comments or observations related to the new Federal proposals and how they may impact on those involved in the fishery in his riding.

The background piece to the Tuesday announcement can be reviewed here.

The details of Bill C68, as introduced in the Commons can be examined here.

For more items of note on the Fishing Industry on the North Coast see our archive page here.