Andrew Wilkinson's road to a BC Liberal leadership win, was assisted by strong success in Northwest ridings

When the British Columbia Liberals selected Andrew Wilkinson as their new leader, his rise to the top of the party leadership came with a strong Northern push, with the candidate finding some significant support from across much of Northwest British Columbia.

While established as a Vancouver MLA in one of the richest of constituencies in the province, his three tours of the Northwest, with two trips to Prince Rupert included in those travels, clearly helped to deliver his message of looking to deliver better economic results for the region.

His investment of time on tours of the region, providing for a strong showing from Northwest Liberals when it came to the final vote count of Saturday evening.

In the balloting from the North Coast, Wilkinson took the lead in each of the five rounds to claim his victory, the middle rounds of two and three providing for the closest of margins between the new leader and his competitor Dianne Watts.

While the early rounds of balloting indicated a split for North Coast Liberals, Wilkinson pulled away for good on the North Coast in rounds four and five, as he picked up the largest amount of the redirected votes from those candidates which had fallen to the side on the night.

The new leader also found an impressive level of support in the neighbouring Skeena riding, where an endorsement from Liberal MLA Ellis Ross appears to have helped to provide for the positive result.

The Skeena MLA's support and introduction for the candidate helped to get Wilkinson's campaign themes heard by a wider audience, and from that delivered a strong vote count through the five rounds.

The Vancouver-Quilchena MLA and Ms. Watts finished one-two in all five rounds  of voting for Skeena Liberals, with the totals as follows:


And while it took a bit of time to build, Nechako Lakes eventually became Wilkinson country by the end of the night. With the Vancouver MLA holding to a second place finish in a tight early going against Todd Stone, who claimed the top spot in the first and second rounds.

However, that tide turned by the middle of the vote process, as Wilkinson moved to the top for the remaining ballots The candidate finally took the lead in Round Three and never surrendered it, claiming the fifth round balloting by a 29 percent margin over Ms. Watts.

The only one of the four Northwest ridings where the Wilkinson campaign stumbled was in Stikine.

That region went with Dianne Watts the former Mayor and MP for Surrey, her message for the northwest interior resonated  best with the Liberal vote participants in the Bulkley Valley and expansive area that the riding consists of.

As the night moved forward Saturday, Watts won each of the five rounds, with the final round providing her with a 13 percent lead over Wilkinson.


You can review the full listings round by round for the entire province here.

Overall the Vancouver area MLA claimed a six percent margin of victory over Ms. Watts when the Balloting had come to an end on Saturday night. With Andrew Wilkinson receiving 4,621 votes compared to the 4,079 that were delivered to Dianne Watts. 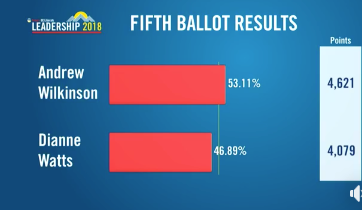 For more items related to Northwest representation at the Legislature  see our archive pages below:


A wider overview of the provincial political scene can be reviewed on our D'Arcy McGee blog.


To return to the most recent blog posting of the day, click here.
Posted by . at 9:18 AM

Email ThisBlogThis!Share to TwitterShare to FacebookShare to Pinterest
Labels: Northwest Liberal riding associations had strong support for the new leader