Update: (See update to story at bottom of page)

Those in Prince Rupert and across parts of the Northwest looking to settle in for a night of streaming video, internet surfing or other online related activities were in for a lengthy disappointment on Saturday night, after internet service across much of Northwestern British Columbia was interrupted.

The connectivity to the outside world shutdown around 7 PM, with service finally restored just before 2 AM on Sunday morning, making for a near seven hour disruption.

In addition to the CityWest internet services in the Northwest, cellular phone users in the region were also affected for much of the same period of time.

Landline Service in Prince Rupert continued to function and cable television services in the community suffered some impact by the disruption.

The use of debit and credit card machines was also interrupted by the situation, making Cash a valuable commodity for those that were out on a Saturday night and had the good fortune to have made withdrawals prior to 7PM.

According to a notice on twitter from  CFNR Radio, a fibre break between Terrace and Smithers was responsible for the disruption to service.

While service has been returned, no information to this point has been released through the CityWest website or their Social Media option of Facebook,  we will look to update the details of the  Saturday Night shutdown, once more CityWest offers up more background on the situation.

For past items related to CityWest and communication service on the North Coast see our archive page here.

Update:  With service in some areas of the Northwest restored, CityWest was quick to update its customers on the nature of the communication disruption with a notice posted to their Facebook page at 2:45 on Sunday morning. 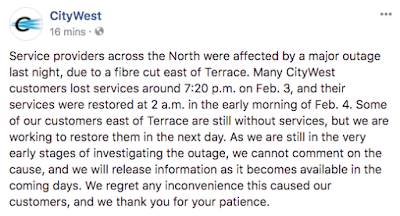 Later in the day Sunday, CityWest followed up their early morning information with a wider overview of Saturday night's outage.

The update outlined the string of events which led to the outage which started with a number of trees east of Terrace knocked out a hydro line, with the broken lines burning through the main fibre line.

With CityWest Vice President Bart Kuntz noting that it was something he had not seen in his 25 years with the Prince Rupert based communications company.

CityWest CEO Chris Marett also provided some notes on the outage, observing as to how the recently announced Sub Sea Fibre project , will provide for added redundancy for the company and will allow the company to restore service in a seamless fashion once the additional link to the lower mainland it is in place.

That time line would see the completion of the Sub Sea fibre link within the next three years. 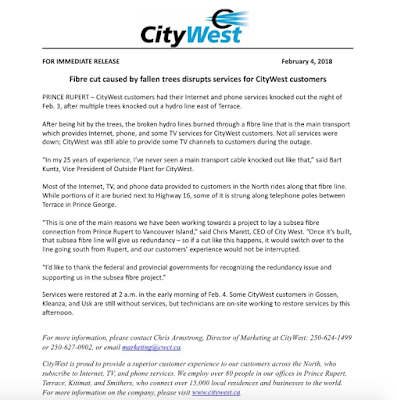 To view the most recent blog posting of the day, click here.
Posted by . at 2:15 AM

Email ThisBlogThis!Share to TwitterShare to FacebookShare to Pinterest
Labels: Communication outage on the North Coast and Northwest