For much of this week, the theme of Emergency Preparedness has been up front from a range of sources, much of the information flow directed by North Coast MLA Jennifer Rice who has been the emcee of sorts for the week long narrative, with a number of appearances in the Legislature to keep the need for preparation high on the agenda.

While much of the focus has been on such events as flood, fire, earthquake or tsunami, CN Rail has taken advantage of the week, to showcase some of its work on Emergency Preparation, highlighting their process through the CN website and across Social Media.

The Railroad has much of its Emergency Response team and equipment in place in Prince George, with Prince Rupert the home for a CN Dangerous Goods Responder.

The Prince Rupert Dangerous Goods Office is one of thirteen such offices that the railroad has placed at major terminals across their continental rail network.

The work for those at the terminal locations is to provide for 24/7 emergency response to any situations that may occur and to offer hazmat expertise to company personnel and local first responders during any emergency calls.

Some of the features of their presentation include resources for First Responders, Information on Moving Dangerous Goods Safely and background on Key Route Risk assessment. 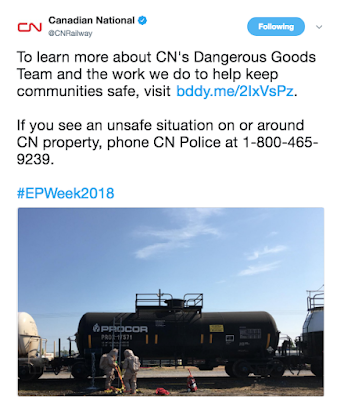 The overview of Emergency Response planning is something that is of key importance to every community along the CN line between Prince George and Prince Rupert.

With a growing number of rail movements rolling along the northern line and the future shipments to the two LPG Terminals planned for Prince Rupert, CN and local municipalities including Port Edward and Prince Rupert are constantly examining their approach to rail safety and protection of residents. 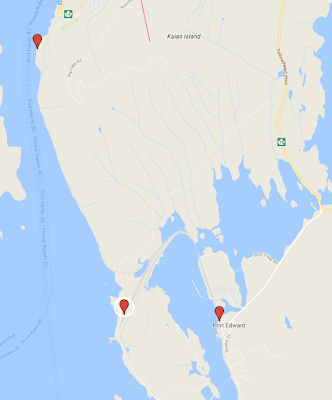 The issue of rail traffic may actually be more of a concern for residents of Port Edward at the moment who see far more of the rolling stock passing by their front windows than Prince Rupert does, leaving the District to make sure that their volunteer fire department and District employees are up to speed on training when it comes to Dangerous goods transit and other issues related to rail transportation.

That's something that the District might want to remind the City of Prince Rupert about as Mayor Brain looks to re-write the terms of the Ridley Island Tax Sharing Agreement.

With the Port continuing to expand and to offer new terminal services those levels of transport through the Port and across the network are bound to increase, something that will continue to make community safety a key concern for many municipalities across the Northwest and east to Prince George.