Things are slowly but surely returning to normal collection themes for the Kaien Road Recycling Centre in Prince Rupert, with the Regional District operated facility now noting that they are once collecting Foam packing at their Industrial park location. 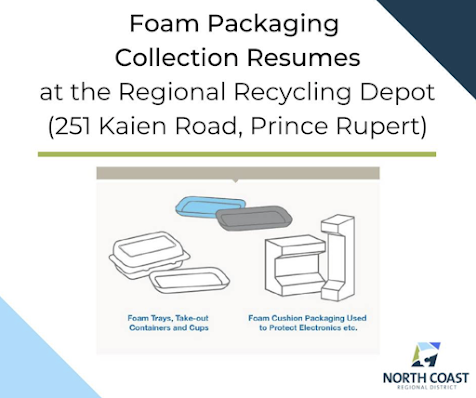 The announcement follows a previous one in late December that returned the bins for glass collection for those who had been holding on to their items, that during the suspension of services from November and December.

The ban on glass and foam packaging came following the extreme weather flooding in the Lower Mainland and Fraser Valley, that had interrupted travel options and impacted on some of the facilities that receive the items from the Northwest.

Residents of Prince Rupert still have reason to make a trip out to the centre, many of the items for recycling collection, remain off limits for the recently introduced curbside  collection program from the City of Prince Rupert.

That new initiative is into its second week of operation, the city having previously noted of the items that their personnel will be collecting and which ones still need to be taken to the Kaien Road centre.

You can keep up to date on notes from the Kaien Road Recycling Centre from the Regional District Facebook page.
More notes related to Sustainability themes on the North Coast can be reviewed here.