After Thirty years at the Port of Prince Rupert, Joe Rektor's ship is sailing ...

The Prince Rupert Port Authority hailed  thirty years of service and a fond farewell to one of their longest serving employees on Thursday, sharing word of the final day of work for Joe Rector, the Vice President of Finance and Corporate Services.

The PRPA noting of his start three decades ago and the career arc that made for his time with the Port.

Joe Rektor joined PRPA in 1992 and has held various roles of progressive responsibility since that time.

Joe is a chartered accountant by trade; in his most recent role as Vice President, he led the accounting, financial control and reporting, business analysis, risk management, human resources and information technology activities of the organization.

Joe also made significant contributions to the port and maritime industry across Canada on behalf of PRPA including his participation on the finance committee for the Association of Canadian Port Authorities.

President and CEO Shaun Stevenson offering his thanks to the VP for his lengthy service with the Port.

“We’d like to extend our sincerest thanks to Joe for his many years of dedicated contribution to our organization, the Port of Prince Rupert’s growth and development, and the community of Prince Rupert throughout his tenure with us – we wish him all the best" 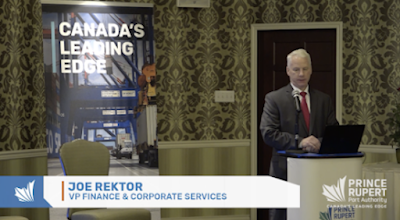 The first word Mr. Rektor's pending retirement came at the June Annual Public Meeting, the 22nd financial update provided for his final presentation on behalf of the Port that he had provided during his time.

The Vice President, noting at the APM of the evolution of the Port from the days of a struggling Break Bulk Facility to the giant footprint on the waterfront and economic engine that it has become in the last ten years.

"As I was putting together this presentation and just wrapping it up you know thinking about for the 22nd time that I have done this  I had a fleeting thought which was. What did I report out on in 2000 when it was the first time that we had to have an annual public meeting.

And so I went into our history books here and was able to find out that I reported on revenue of 6.4 million for the Port and expenses of 6.4 million and a Net Loss of fifteen million.

And the reason for that was, that at that time and this was you know pre containerization of Fairview, we had taken a fifteen million dollar write off of Fairview Terminal to really reflect that the utility at that point in time had effectively diminished to almost zero value.

And so that was kind of a very ...  I guess well from there things could only go up I couldn't imagine it getting any worse     -- Retiring VP of Finance and Corporate Services, Joe Rektor, at the ports APM in June

After thirty years, Mr. Rektor now steps aside and like those of us in the community will watch with interest as to the next chapter for the Port.

Thursday's notes on the retirement for the VP, also served as an introduction to the latest member of the Senior Management team at the Prince Rupert Port Authority.

Taking on the Duties as Vice President of Finance, is Agnes Piotrowski, with the Port outlining some of her CV as part of their Thursday announcement.

Agnes Piotrowski is a senior executive with experience in strategic and operational roles and she holds her Chartered Professional Accountant (CPA) designation. Her professional career started in audit and finance at KPMG LLP. Agnes then moved to specializing in major capital projects at the Capital Regional District, before acting as Executive Director, Financial Operations & Reporting at Island Health, most recently.

Throughout her career, Agnes has built a reputation for strong financial acumen and insight to effective compliance and the standardization of processes. Agnes’ work with strategic business partners is characterized as innovative and has helped to transform finance functions within business, drive change, and support decision-making through data-driven insights.

The official welcome aboard for the new VP coming from President and CEO Shaun Stevenson.

“Agnes joins PRPA at an exciting time in the growth of our organization and in the development of the capacities and role that the Port of Prince Rupert plays on the global stage in ensuring resilient supply chains for Canadians, both exporters and consumers. We are delighted to have Agnes join our executive team and we have every confidence that Agnes’ demonstrated leadership in her field will help us achieve our growth ambitions.”

You can review the full PRPA statement here.

More notes on the Port and its partners on the waterfront can be explored from our archive page.