BC NDP leadership race ... One and done? 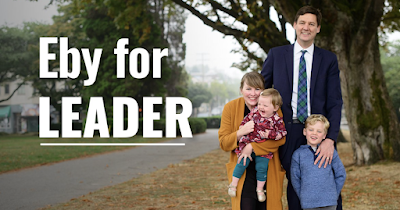 David Eby made it official last night, announcing his intention to seek the leadership of the BC NDP and by happenstance the opportunity to be the next Premier of British Columbia, the 37th in the province's history.

The announcement from his home riding in Vancouver-Point Grey bringing out more than a few of his fellow cabinet ministers who may have briefly considered their own run, before deciding that they just weren't all that interested in the job at the moment.

Among those taking a pass this time around, was a voice from the Northwest that many thought might have taken a shot at the prize, but as Nathan Cullen noted in his comments last week, the timing for him as it seems to be for many, was just not right.

Many of the others perhaps still in a bit of shock over the announcement last month from Premier Horgan that he was stepping down, a statement which launched much speculation but few candidates for his job up until last night.

As it is, Eby's announcement of Tuesday brings the total number of those seeking the NDP top spot to ... One!

The Housing Minister and Attorney General who was first elected to the Legislature in 2013 iscurrently the only candidate and the one that most within the party and outside of it, seemingly believe will be the winner and the one to defend the NDP record when the next election comes around.

That trip to polls whether at the fixed date, or perhaps before depending on how the party views the political landscape once it all is made official later this fall.

48 NDP MLA's are supporting the candidate in his quest, that out of a total of 57 in the Legislature.

Though so far, there have been no notes delivered by North Coast MLA Jennifer Rice to read how she views the way the political wind may be blowing for her party.

With only nine  MLA's seemingly outstanding, it does seem unlikely that anyone else has plans to mount a challenge from within, which leaves party members and activists outside of caucus  to step into the contest it would appear if anything but a coronation is ahead.

The candidate has already launched his website, which highlights his background (see here) as well as some of the work he's taken on under as part of John Horgan's Cabinet,  among some of the themes:

Putting out the Dumpster fire at ICBC, Tackling Dirty Money,  Part of a Government that works for people.

Not to be left out of Tuesday's news flow of the entry of Mr. Eby into the NDP race were the BC Liberals, who didn't quite offer up the same check list of 'achievements' for consideration. 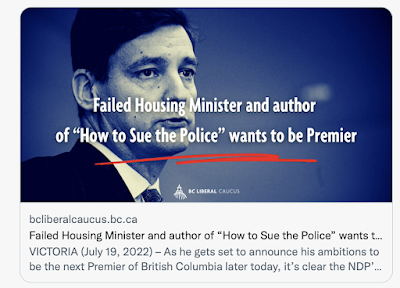 That pretty well would seem to set the stage for what would be a David Eby/Kevin Falcon showdown, both new leaders for their parties, but a pair of contestants with a bit of political baggage to bring to the next campaign whenever it may come.

More notes on the Legislature can be explored here.

A look at how the provincial media is covering the Eby ascension towards the Premier's Office can be viewed later this evening as part of our Victoria Viewpoints feature on our D'Arcy McGee blog.