The month long traffic snarl into the downtown core along McBride Street will continue for at least a few more weeks, with Council hearing word from the Operations Director on Monday that late August is the bullseye for the completion of the paving element for the road remediation.

Councillor Nick Adey made the inquiry as to whether there is an end in sight, in the waning moments of the only council session for the month.

With Richard Pucci providing Council with the most up to date 411 on the long running reconstruction efforts.

"Thank you Councillor, yes there is an end in sight. We are likely about three weeks away from paving and then we are at the mercy of the Paving Company.

But I think we can open up Fourth and McBride very soon, so that we can get some traffic moving forward  through there on the gravel spot.

But we're looking at between two and three weeks, I'm saying three weeks just because,  we want to make sure that so we don't underestimate that"

Mr. Pucci also provided an update on the city's annual paving program, advising that the contractors plan to start on the work following the long weekend.

As for the notes on the McBride street project, since the Monday meeting, the city has reopened the intersection of McBride and Third Avenue, with traffic once again flowing eastbound towards Cow Bay.

Work is also in motion towards reopening Fourth Avenue as outlined in the Director or Operations notes.

The next major work for the project is going to see the Fifth Avenue intersection the focus for the contractors in the days ahead, which likely means a few more weeks of congestion and traffic rerouting to come.

The project began with the discovery of a water issue underneath the roadway on June 7th, the work expanding to include all of McBride from Fifth Avenue to Third Avenue.

The overview of the city's work can be reviewed from the Council Video Archive starting at the two hour  8 minute mark.

Update: Late Thursday afternoon, the City added to the information flow related to the work to take place at the Intersection of Fifth Avenue and McBride next week. 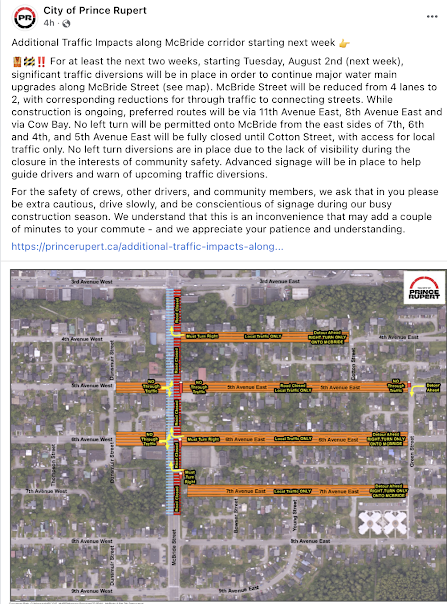 More notes on the Monday Council Session can be explored here.

A wider overview of past Operations themes is available here.