"It wouldn't surprise me at all if we start to see more requests coming, because there are some incredibly problematic names throughout the province" -- Municipal Affairs Minister Nathan Cullen on whether more communities will be requesting name changes

The announcement this week from Municipal Affairs Minister Nathan Cullen towards the provincial affirmation of the name change of the Village of Queen Charlotte to Dajiing Giids, made much of the process that was launched by the local government officials.

The work of the leaders on Haida Gwaii gaining much praise from Minister Nathan Cullen and North Coast MLA Jennifer Rice as part of their comments as part of the live stream presentation of Wednesday. 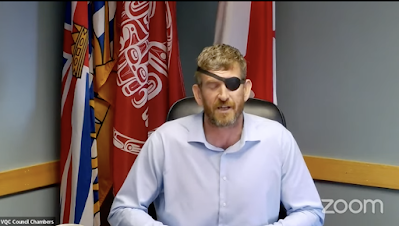 That work of the Council was hailed as a blue print of sorts for other communities that may be considering plans to abandon their current names for those more reflective of the history of their communities for their residents.

Expanding the province's role in the process,  Mr. Cullen noted of the work done on Haida Gwaii prior to the call for the province to move the name change request forward.

"We were able, once we got the request from the Village to bring this to cabinet quite quickly.  That was possible because of all that work that was done by the SHIP elders, by the Council and in the community.

This is careful, deliberate and challenging work, to bring people together to talk about things the history, the names and the meaning of it. Yet the delivery to cabinet was quickly and confidently done because of all that work.

Knowing that these things can be challenging, Jennifer Rice was key in being able to again talk us through that ... this is breaking new ground for the province, this is quite advanced on Haida Gwaii.

But for a municipality, one of the 188 municipalities in  BC. This is the first time that we know of that a municipality has restored a  name back and changed officially their letters patent, which is their official name in the books of British Columbia.

But it is something that we as a Ministry and as Government frankly will learn a great deal from as other Municipalities, Regional Districts may step forward and ask for a very similar type of offer to their communities back"

As part of the Question and Answer period that came with the Wednesday information session, Mr. Cullen fielded a question from BC Today reporter Shannon Waters who asked if he anticipated any upcoming requests for name changes from across the province.

"There's a municipal election coming up in the fall ... I don't suspect we'll have any between now and then, simply because there's just not enough space to go through the deliberate process that I think you need to go through .

One of the things I'm asking the Ministry of Municipal Affairs to do, is to learn from what took place on Haida Gwaii, with Dajiing Giids and say what is that we need to pull in terms of best practices how can communities engage with one another.

The fact that this all started with the SHIP elders, really was meaningful to us as a government that the initiative started there.

I don't think there will be any prior to the next election.

For all of our local elected leaders, could this be an election debate within those communities large and small across BC, I wouldn't be surprised.

But we as a Ministry don't direct we take requests, we don't tell people to go review their names we simply support the efforts ... So I don't have a specific number for you Shannon. But it wouldn't surprise me at all if we start to see more requests coming, because there are some incredibly problematic names throughout the province"

The full overview of the process and the prospects for the future can be reviewed through the video from the Wednesday session, the key area of note starts from the 17 minute mark.

More notes on the Changeover to Daajing Giids can be reviewed from our notes of July 13.

A wider overview of the provincial scene from Victoria is available through our archive page here.