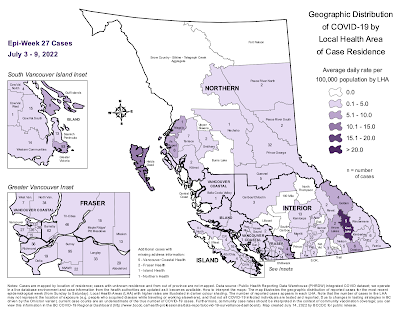 The numbers for reported cases of COVID remain low, but they are on the rise albeit slightly for many communities across Northwest British Columbia.
This week's report from the BC CDC for the period of July 3-9 shows a slight increase for a few areas that had been listed at zero for the last few weeks.
The numbers are still in the single digits, but this past week did see the Terrace area jump to 7 cases recorded,  That high point was followed  with 6 for Prince Rupert (up from Zero last week), 4 on Haida Gwaii, 2 for Kitimat, 2 for Smithers 1 for Nechako , 1 in the Nass Valley and 1 for the Bella Coola Valley.
Snow Country-Stikine-Telegraph Creek, Burns Lake, Upper Skeena and Central Coast were among those communities that recorded no cases of COVID for the survey period.

The highest numbers listed in Northern British Columbia's continue to come from its largest community, with Prince George recording a case count of 32 in the period which is a an increase of 13 in case reports from last week.

The full review across the region for the week of July 3-9  from the BC CDC looks as follows:

Terrace --  7 cases
Prince Rupert -- 6 cases
Haida Gwaii -- 4 cases
Kitimat -- 2 cases
Smithers -- 2 cases
Bella Coola Valley -- 1 case
Nechako --  1 case
Nisga'a --  1 case
Burns Lake --  0 cases
Snow Country-Stikine-Telegraph Creek -- 0 cases
Central Coast --  0 cases
Upper Skeena --  0 cases
The Provincial Data Review shows some strong indications of an increasing summer wave for the coronavirus and looks as follows:
973 New Cases (up 208 from last week), with 426 hospitalized ( up 57 from last week), 34 in Critical Care (a decline of 2 from a week ago) and 22 new deaths from COVID reported (a decline of 2 from a week ago).
The total number of deaths in BC since the start of the coronavirus is 3,823 to date.
There have been 376,329 cases of COVID recorded in the province since the arrival of the pandemic
As of June 30 the Province had distributed 12,954,754 first, second or booster shots of the COVID Vaccine, with a fourth booster program for specific groups underway.
Thursday's provincial report lists  34 new cases of COVID for the Northern Health region for the reporting week, a decline from seven days ago, which continues a trend in recent weeks.
That makes for a total of 30,479 cases recorded since the start of the pandemic.
Of note an increase in hospitalizations while those cases in critical care remained the same.
For the Northern Health Region in total as of Thursday,  26 patients are listed as in hospital ( up 8   from last week) , with none noted as in Critical Care ( a decline from 2 last week) , the Northern Health region  recorded 2 COVID related deaths in this last week.
The Northern Health total of deaths attributed to COVID is listed as 360 since the start of the pandemic.
The  breakdown of hospitalizations by community in the Northern Health region is not included in the data release information.
The larger BC CDC Data release is available here.
One week ago, Health Minister Adrian Dix and Provincial Health officials outlined how they were approaching their plans for a fall vaccination program, which will get its launch in September.
You can review those notes from the July 8th information session here.
Past information statements on COVID and other notes on the Northwest response can be reviewed from our archive page.