"Are things getting out of control?" -- Councillor Cunningham notes of growing number of property variance requests coming to Council 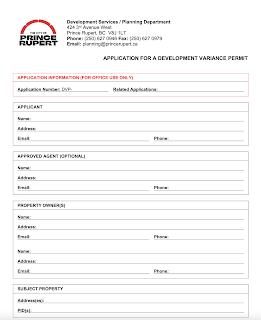 In Prince Rupert, it seems that if you want to build your dream home, just go ahead with the plans and hash out the details later with a variance request.

That was somewhat of the current of discussion from Monday's Council session as the city's council members explored a lengthy list of variance requests on the evening, with the first three of the collection of eight generating much of the discussion.

The topic was one that had the Council members making note of what has been a growing number of properties that come to them after the structure has been completed, or is nearing completion with a number of variance request then to be applied for.

Among some of the observations to the theme over the course of minutes of discussion included:

"This is a property that has been hanging around for sometime, it was on hold for what looks like a calendar year ... and I'm just wondering this is a new building, I believe it was built as of  from 2020 on. I'm just wondering how we end up with a new building that needs all of these variances in order to move to completion. Would there not be some process by which some oversight of the construction would have prevented it coming  to this point in this way" -- Councillor Nick Adey

"I have no problem passing these variances, but I have a problem with the fact that we have to pass them. You know a guy can't start tearing down his house. But you know,  at the end of the day he chose not to do certain things ... like I say, I have no problem passing this variance, but at the same time I'm wondering why we have to pass variances on a whole building and not just one aspect of it or another.

We've turned down people that have, one person in particular, that came to us with plans to build a rather large house on a lot, we turned him down ahead of time, because of all the variances he needed.  And another where we had another one where we turned down a build after he built it and wanted a variance.   -- Councillor Barry Cunningham

Councillor Adey added to his narrative on the night, concurring with Councillor Cunningham that the Council was not likely to order a reversal of construction, returning to his theme of future construction and the need for stop gaps to try to prevent such instances from happening again.

By the time the third of the opening variance request came along, Councillor Cunningham made his observation towards how the issue may be getting away from city staff and council.

"I've been around and looking at a lot of these variances in the last month and this month. And we're asking to pass variances on things that are already started to be built, or are built.

And I'm wondering is this getting out of control or what?  ... In most cases I've got no problem passing them, it's just like it's started before we're even being asked" -- Councillor Barry Cunningham

City Manager Rob Buchan handled most of the council enquiries on the topic, outlining the current process of development by the City, as well as to outline some of the Council's options towards how they choose to handle the variance requests.

He first noted that in some of the instances up for consideration on the night, that the process under consideration was to move forward towards public notification, where the public will have opportunity to comment.

Towards how Council can handle variances the City Manager reviewed what Council needs to keep in mind related to their approach.

"Council does not have to say yes to a variance application, it is discretionary. It's something that you may feel compelled to, you know given the choices to say yes to, but you are not obliged to say yes. Sometimes mitigating measures may need to occur to try to address some of the variance if that's possible. It is entirely Council's Discretion here, acting in good faith"   -- City Manager Rob Buchan

To the discussion on the current process of oversight, the City Manager observed how staff would be reviewing  the current approach and look at how to improve on it.

"We will make some inquiries to see whether or not if any of these could have been dealt with earlier by staff, or caught earlier.

It really depends on the case, but we will take a look internally and see whether or not there's more checks that we could be doing"  -- City Manager Rob Buchan

You can review some of the background towards how all of the eight variance requests for the night were address through our Council Timeline Feature.

The review of the discussions for each start at the twenty four minute mark of Monday's Council session.

City Council and staff often have noted of the prospect of a surge in housing that will be required in the community to address upcoming labour needs and port development.
A topic which made for one of the elements of Mayor Lee Brain's recent State of the City presentation. 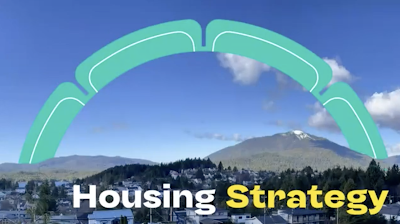 Clearing up how they approach variance requests and laying out a more vigorous overview of steps along the way would seem to be some pro-active action towards something which could one day overwhelm Council's attention on housing themes.
How the Current process on Variances is handled can be reviewed from the City website.
Some of the past notes on housing themes in Prince Rupert can be explored through our Housing archive.
More items of interest from Council Discussion themes can be reviewed from our archive page here.
Posted by . at 1:24 PM