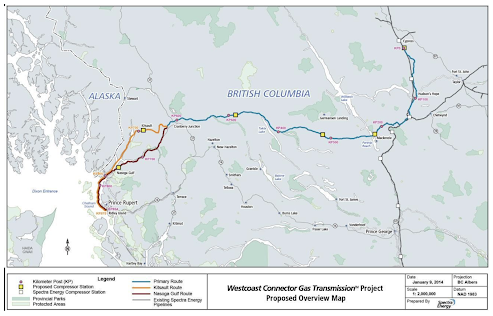 One of the major gas transmission projects of a decade ago is still alive, though at the moment in a bit of a holding pattern, so much so that Enbridge Canada is now seeking an extension towards their Environmental Assessment Certificate.

The Project the West Coast Gas Transmission Project which was first approved in 2014 would see gas transmitted  across British Columba with two routes proposed to bring it to tidewater on Ridley Island.

In a letter on May 10th to the provincial Environmental office, Enbridge outlined some of the changes to their planning from the last extension that had been granted in 2019.

A letter from  the BC Environment Office outlines the nature of  the extension request and the steps ahead for the Agency towards consideration of it. 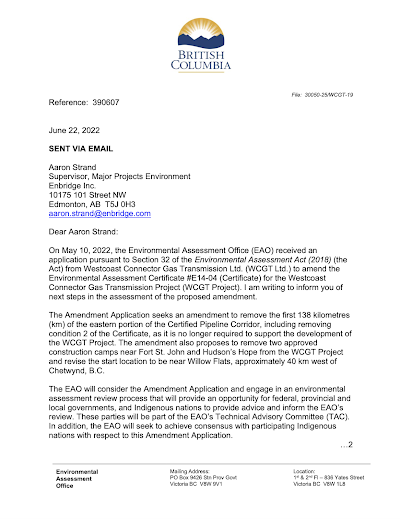 Should they receive approval for the EA certificate they would continue on with their work towards regulatory permits, design and mitigation planning. 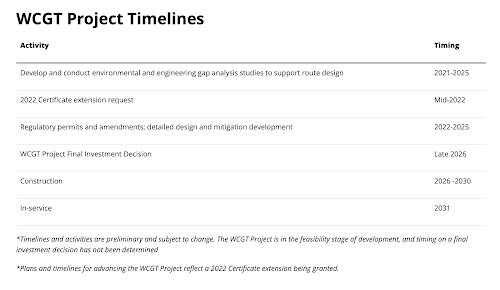 You can review their file with the BC EAO from the agency listings here.

The pipeline plan from 2014 was originally proposed by Spectra Gas and would have fed the then proposed BG Group Natural Gas Terminal through Prince Rupert LNG, a project from those heady days of LNG development in Prince Rupert that was subsequently terminated.

As for what the plans are for the gas once it reaches Ridley Island, the Enbridge project page offers up this update on their plans.

With the merger of Spectra Energy and Enbridge in 2017, WCGT Ltd. is now a wholly owned subsidiary of Enbridge Inc. Since 2017, we have been working closely with potential terminal proponents on developing an LNG project concept that would receive natural gas from the WCGT Project.

With the project now seemingly showing some signs of movement again, we'll revive our archive for the WestCoast Gas Transmission Project, you can follow any future developments for the file here.