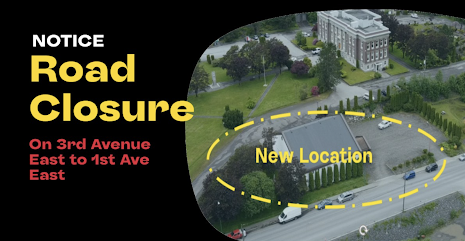 With the city now starting the demolition program of the old Jehovah Witness Hall, some impact on travellers has been announced, with a ROAD CLOSURE now in effect for the stretch of Third Avenue East from McBride to where Third meets First Avenue East.

The City advising today that the stretch in question will only be available to Local Area Traffic and noting of the presence of traffic signage and controllers.

It's noted that the restrictions on traffic will be in place for the next week or so.

The area in question has already been somewhat of congested one owing to the major road and water repairs underway along McBride.

The start of the demolition process to make way for the new RCMP detachment was the subject of a City Information release earlier this week, as well as a celebratory note from Mayor Lee Brain.

Some background on the RCMP project also made for a segment of the Mayor's June 28th State of the City presentation.

More background on the progress for the new RCMP detachment can be explored through our Major projects archive page.