As we outlined yesterday,  the latest data on vehicle crashes in Prince Rupert has identified some trouble spots in the city most of them on the entrances to or through the downtown core.

And with the data on vehicle traffic outlined, we put in an email to Complete Streets of Prince Rupert, so as to gain the view of things from those who transit the city's streets on bikes, buy foot or other modes of transportation.

Complete Streets spokesman Christopher Lightfoot took us up on the offer to share some observations from his group.

Mr. Lightfoot observing that he is more than familiar with the hazards of each of the locations mentioned in ICBC review and how he does his best to avoid those areas as much as possible when he rides.

"Many popular destinations in Rupert require crossing or travelling on Highway 16 at some point. The sooner the City is allowed to calm this path the better. In terms of cycling, the feedback we’ve received tell us that people would like to ride their bikes in Prince Rupert, but most are too intimidated by vehicle traffic to ride where they would like to go. Also, our surveys have repeatedly shown there is public appetite for protected cycling infrastructure in Prince Rupert."

Lightfoot also expanded on the focus that the Complete Streets Group in the city puts towards advocating for safety on the streets and some of the goals that they have towards calming traffic and making the travels somewhat less dangerous for those who are cycling the downtown area.

"The Complete Streets approach has always been about enhancing safety, accessibility and enjoyment for walkers, rollers and drivers by changing the physical shape of the street. Therefore, in our opinion, we should be cautious of attempts to improve safety for pedestrians that rely on signage, paint only, or awareness campaigns.

Telling people what to do is usually a waste of breath and money. Also, we should be wary of street modifications that prioritize the needs of drivers over those of pedestrians. For example, after a spate of documented crashes on 2nd Avenue West, and a push from local government, the Province was compelled to ‘improve’ safety at the Chevron/Canada Post crossing.

What resulted was one pedestrian crosswalk was removed and overhead lighting was installed. The lighting is appreciated; however, it seemed that the intervention aimed to make driving through the intersection easier because drivers now only need to watch for pedestrians at one crossing, not two.

There are several examples of this type of single-side crossing intervention on 2nd Avenue West and all still feel very scary to cross during the day or night. Curb extensions on all four corners of those intersections would have slowed vehicles, improved visibility for drivers and pedestrians, and narrowed the crossing distance for pedestrians. Physical measures that calm traffic and prioritize the convenience of people who walk or roll improve the safety and ‘street-feel’ for everyone in the community." 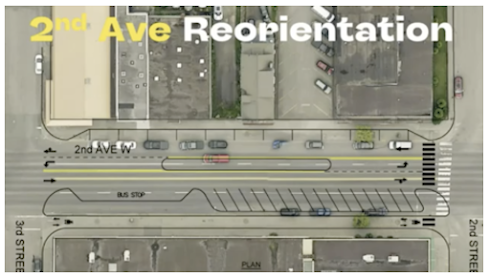 As part of Mayor Lee Brain's State of the City Presentation, some plans for the future of traffic issues in the downtown core were revealed, particularly in the areas of parking and road measures.

Complete Streets had a few thoughts on those proposals from the June presentation sharing them with the North Coast Review earlier this month.

Mr. Lightfoot also noted of both the current Transportation study underway by the City and the upcoming fall election, two areas where he observes that community residents could advocate for safer streets.

"Hopefully, with the development of a new Transportation Master Plan and Active Transportation Plan, Prince Rupert will begin to take more concrete steps toward safer, easier and more enjoyable streets for everyone. Let’s hope our next Mayor and City Council share these aims." Towards the Transportation study, we outlined the scope of the city's "Connect Rupert" consultation in early July, you can take part in the ongoing process through the city's Rupert Talks portal.

The deadline to share your opinions and comments is set for July 29th, more on the engagement process is available here.

To keep up with the advocacy work of Complete Streets for Prince Rupert, follow their website and Social media page here.

More notes from Prince Rupert City Council can be explored through our archive page here.