Dwindling menu items to be found on Eat Street of late

From some promising early days of a food festival in the downtown core, the Eat Street project at Third Avenue West and Seventh Street has seen some scaling back of food options of late.

The site which at one point had three of the city's popular food trucks on site, has in the last few weeks been home to just one food vendor at the moment.

The Trishan Food Truck is currently staged there, though it was an option not available to would be diners over the noon hour today.

The rest of the highly touted Eat Street collective for now seems to have taken leave of the area.

One the Uncle Robbie's truck setting up shop in the Atlin Terminal parking lot, making the most it would seem of the Cruise ship and tourist traffic in the popular Cow Bay area. 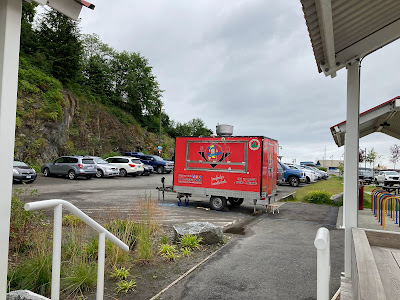 The Eat Street plans made for part of last month's State of the City presentation, with the area one that is part of the city's hopes for  a wider change of focus and redevelopment of what they have christened the Midtown District.
Mayor Brain noting at the June 28th presentation that the City over time has plans to develop the site better, making it look a bit nicer, as well as to put in some lighting for the location.
The city has never really detailed however, how many days the Food Trucks are expected to make Eat Street the happening place and if there were any guarantees for a steady schedule of opening hours.
The City however, may may have more than some aesthetics and scheduling work ahead though if they wish to try to generate more interest in the area.
Last week the RCMP outlined some background on a violent incident just off the Eat Street area along Fraser Street.
That incident combined with some notes for Council in April related to the Urbaloo on site, would seem to suggest that the area may need some attention from the local detachment members to reign in some of the activities of concern in that part of town.
Those concerns surely something to be attended towards, before the anticipation of any large volume of diners arriving to check out the food options.
Beyond the safety issues and such, the visual landscape  of the immediate area probably is woking against success at the moment.
The rubble of the Belmont still there, serving as  a reminder of the fire of May 1st. As well, the shell of the Empress building looms large across the street  still awaiting demolition.
As realtors would say location is everything and for the city's concept of a Food Truck square which was a good idea, the decision of placement may have put the civic redevelopment cart ahead of the horse.
A location that may have brought more immediate success for the Eat Street theme that is popular across North America,  is the plaza area adjacent to the City's Mariners Park which still serves as the main gathering spot for the community.
It's a suggestion that residents may have offered up to the Council membership had they been consulted on the plans back when Eat Street first popped up on the Council to do list.
As it is, Eat Street remains very much a work in progress and how it evolves may be tied to how fast Council can revive that part of the Midtown area as part of their ambitious plans for the neighbourhood.
The official invite from the City for Rupertites to make a stop at Eat Street came in early March, we tracked some of the history of the project as part of our notes at that time.
For more notes related to the city's Commercial sector see our archive page here.
Posted by . at 1:47 PM